Following the footsteps of nurses in Kerala, whose protests regarding low payment of wages led to government ensuring a hike in their pay to R20,000, nurses in TS too are going to approach governments

HYDERABAD: Following the footsteps of nurses in Kerala, whose protests regarding low payment of wages led to government ensuring a hike in their pay to Rs 20,000, nurses in TS too are going to approach government here.Based on the GO that will soon be issued in Kerala, the Trained Nurses’ Association of India and the Nursing Officers’ Association in TS will send requests and recommendations to state government. 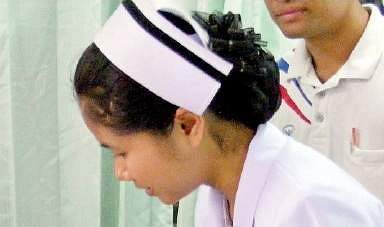 The decision to implement the recommendations made by an expert committee set up by the SC in 2016 was taken after intense protests by more than one lakh nurses from across Kerala since June.In TS, nurses associations have been negotiating with health officials for almost a year, but nothing has changed. Now, they say, there is hope.

“Now that our counterparts in Kerala won the case, we will request the government again,” said KT Sheeba, secretary, TNAI, Telangana. Telugu states come second after Kerala where number of nurses is highest. “Some of the us are surviving on salaries as low as `3000. Considering the kind of care we provide to patients while working on long-hour shifts, we are severely under-paid,” pointed Laxman Rudavath, convenor, NOA.

Pvt hosps pay poorly
Students spend between 35,000 and 1 lakh for graduating from a private nursing college
They earn between 6,000-12,000 in private sector
They spend around 5000 to graduate from a government college which is later reimbursed
In government hospitals, a fresher earns 20,000 but are hired on contract basis

More from Telangana.
Now we are on Telegram too. Follow us for updates
TAGS
Nurses