HYDERABAD: The state government’s tax and non-tax revenue registered an average of 10.92 per cent growth in the first quarter of the current financial year as against the first quarter collections of 2016-17 fiscal year. This indicates that the state revenues are growing constantly. 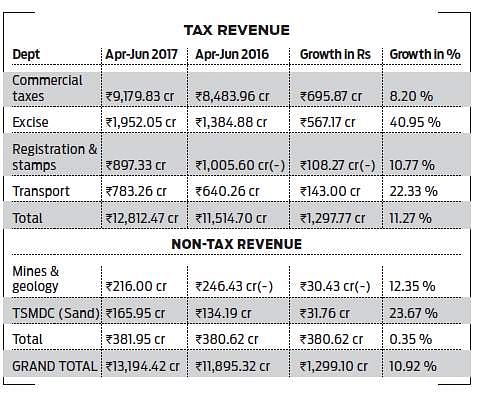 According to the statistics available with the finance department, the government collected ` 13,194.42 crore revenue in the first quarter of 2017-18 as against the collection of `11,895.32 crore in the first quarter of 2016-17. Despite, a 10 per cent overall growth in revenues, two sectors registered negative growth. The stamps and registration department registered 10.77 per cent negative growth.

The real estate sector, which suffered a huge jolt in November 2016 after the demonetisation, has not regained its glory so far. The number of property registrations after demonetisation has come down drastically. The mines and geology department too registered 12.35 per cent negative growth in contrast to the corresponding period of  previous year.

Though state registered abnormal growth in revenue in sale of sand, mines and geology department’s revenue declined in absence of a mining policy.

More from Telangana.
Now we are on Telegram too. Follow us for updates
TAGS
revenue