The 200 Technical Assistants are supposed to be paid close to Rs 15,000 a month. They have not been paid for six months now.

HYDERABAD: THE Telangana government has so far spent Rs 1,700 crore on Telangana ku Haritha Haaram (TKHH) but seems to have no money to pay the salaries of the scheme’s foot soldiers — the Technical Assistants (TA) working for the Telangana State Forest Department (TSFD). TAs are outsourced employees, numbering at least 200. They have not been paid for the last six months.
TAs play an important role in ground level implementation of TKHH. Each TAs is to be paid close to Rs 15,000 a month. The total amount due to be paid to the 200 TAs for six months is Rs 1.8 crore. 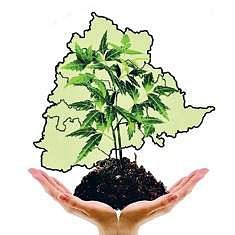 TAs from different parts of Telangana, who spoke to Express, revealed that their superiors, including some Indian Forest Services (IFS) officers treated them like ‘bonded labourers’.  “We have to roam around for our work. TSFD has not even provided any money for fuel for the last six months. We are paying out of our own pocket. Many times we are tasked with doing the personal chores of our superiors. Whenever we approach our superiors regarding pending salary, we are simply told to quit or stop complaining,” said one TA.

TAs not on our payroll : TSFD

However, the TSFD claims that the TAs are not on the department’s payroll. Rakesh Mohan Dobriyal, Additional Principal Chief Conservator of Forests (Social Forestry), TSFD, said, “Technical Assistants are not on payroll of forest department. They are hired by District Forest Officers or Divisional Forest Officers (DFO) based on requirement and availability of funds. National Rural Employment Guarantee Act (NREGA) funds are received from Rural Development department, of which three per cent is marked for administration purposes. From this three per cent the DFOs have to pay salaries of TAs. It might be the case that DFOs hired more TAs than required and are now unable to pay their salaries.”
Principal Chief Conservator of Forests, Telangana, PK Jha said the issue had not been brought to his notice.

However, TAs counter the forest department’s argument by alleging DFOs are misusing NREGA funds.
“Senior officers are using the three per cent NREGA funds for their own purposes like hiring a driver for their vehicles, watchmen for bungalow and in some cases even for repairs in their personal houses. The money which should have been ours is also used for paying electricity bills and buying stationary. This is an open secret but there has been no action from Aranya Bhavan,” one TA charged.
Of the Rs 1,700 crore spent on TKHH till now, close to Rs 400 crore is from NREGA funds.

The 200 Technical Assistants are supposed to be paid close to Rs 15,000 a month. They have not been paid for six months now. The forest department has passed the buck to district officials.

More from Telangana.
Now we are on Telegram too. Follow us for updates
TAGS
Telangana ku Haritha Haaram corruption