The plant, being built over 2 acres, will clean 16,000L of sludge every day

WARANGAL: In order to over come the problem of untreated sewage, the Greater Warangal Municipal Corporation(GWMC) with the help of Bill and Melinda Gates Foundation is setting up a  Faecal Sludge Treatment Plant (FSTP) at Ammavaaripeta area on the city outskirts at a cost of `1.2 crore.

The plant has been entrusted to Bengaluru based company Tide Technocrats, an environmental and sustainable consulting organisation and also empaneled consultant for Swacch Bharat Mission. The plant being set up on 2 acres of land provided by the corporation would clean 16,000 litres of  sludge everyday. 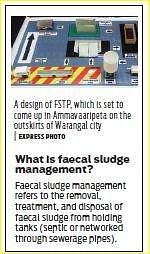 Plant to be based on thermal technology According to Administrative Staff College of India(ASCI), project monitoring unit coordinator Rajmohan Reddy, the corporation is keen to construct a FSTP to treat the faecal sludge so that water could be reused for watering plants and the sludge for fertiliser. The treatment plant would also prevent unauthorised dumping of faecal waste, he added.

“Unlike other FSTP plants which are based on biotechnology, this particular plant would be based on thermal technology. This is for the first time in the country, a thermal-based FSTP is being set up by a civic body. This one is much better than bio-based FSTPs as it does not emit any bad smell and the bio waste could be utilised as fertiliser,” he said.

According to him, the bio-charred compost generated   through the plant could be used as soil fertiliser. “We are planning to use the compost in the park being developed adjacent to the FSTP. Once it is successfully utilised, it would be sold to farmers in the future.

About 200 kg of compost would generate everyday. Through the sale of compost, the corporation could also earn a good revenue,” he pointed out. Even the treated water would be utilised to water plants in corporation’s nurseries and parks, he added. “This would save lot of ground water for the corporation,” he said. Tide Technocrats, which is executing the project, is procuring the thermal container from US.

The company would be taking care of the plant for a period of one year and after that the corporation has to make arrangement for its maintenance.

“We have requested  Bill and Melinda Gates Foundation to provide maintenance for a period of five years instead of one year. Let’s see what they say,”  Rajmohan Reddy said. The maintenance of the plant would cost corporation `8 lakh per annum.

Kadiyam lays the foundation
The foundation for the FSTP plant was laid by deputy chief minister Kadiyam Srihari on the occasion of State formation day.  The officials are planning to operate the plant from August 15. Once this plant starts functioning successfully, the corporation would set up two more such plants in the city. “If this plant yields good results such plants would be set up in other cities and towns in the state,” Rajmohan Reddy said.