The IT Minister said that Congress and TDP had neglected the lower Penganga project for 70 years, adding that it was the TRS government which  took the initiative in this regard.

ADILABAD/MANCHERIAL : Municipal administration and Information Technology minister KT Rama Rao said that Congress and TDP had neglected the lower Penganga project for 70 years, adding that it was the TRS government which  took the initiative in this regard.

He said that the State government was on his way to fulfill the dreams of the people of Adilabad Constituency of finishing the Lower Penganga project and reaching agreements with Maharashtra state government over water sharing. 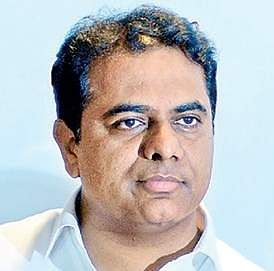 He was speaking at a meeting of party workers after attending the marriage of the son of former Adilabad MP Ramesh Rathod at Utnoor on Saturday.

The minister said that Chief Minister K Chandrashekhar Rao had reached agreements with Maharashtra on sharing of water to avoid problems in the future.

KTR also said that 1,200 thousand million cubic feet (tmcft) of Krishna river water would be used by Telangana for irrigation and drinking water. For Adilabad municipality, Rs 30 crore had been sanctioned for supply of drinking water in the first phase, he said and added that the government had been supplying nine hours of uninterrupted power to agriculture sector.

Rao also said that the government had implemented welfare schemes worth Rs 5,300 crore every year whereas in the erstwhile state of Andhra Pradesh, only  Rs 830 crore was granted on yearly basis.

The minister also held a review meeting at the collectorate with officials. Later, he participated in some programmes in  Bellampelly in Mancherial district.

Stay up to date on all the latest Telangana news with The New Indian Express App. Download now
(Get the news that matters from New Indian Express on WhatsApp. Click this link and hit 'Click to Subscribe'. Follow the instructions after that.)