HYDERABAD: Lending credence to the widely-held belief that TDP is inclined to joining hands with TRS in Telangana in the next general election, party supremo and AP chief minister N Chandrababu Naidu has dropped enough hints in this regard by adopting a soft stance on TRS in the state. Disapproving the call given by his party leaders L Ramana, Ravula Chandrasekhar Reddy and Aravind Kumar Goud to the cadres to wage a war against TRS government, he asked them to serve the people by taking up their issues instead of waging a war against anybody. 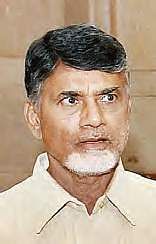 “Here, some leaders are using big words like ‘war’. No need to wage a war against anybody. You please serve the people. Then, people will automatically make you win elections. Leave the responsibility of formulating strategies on me,” he said while addressing the extended executive meeting of the Telangana unit of TDP at NTR Trust Bhavan on Thursday.Naidu’s indirect advice to the party’s rank and file that they need not go aggressively against the Telangana government has confirmed the rumours that the yellow party is moving towards forging an electoral alliance with TRS for next general election.

Interestingly, at a time when party senior leaders expected a stirring and stinging speech from their party boss following the exit of Revanth Reddy and some others from the party, Naidu refrained from firing salvos at the TRS.  Indirectly responding to the repeated queries raised by party leaders on likely electoral alliance in the state, Naidu said, “In politics, one should not disclose one’s future strategy. If it is revealed, then it’s not a strategy at all.”

Asking his party cadre in Telangana not to be disillusioned by the recent exodus of leaders to other parties, Naidu said the TDP had weathered several such critical situations in the past. “Some of our party leaders shifted their loyalties for various reasons. I won’t talk about such leaders now. In fact, crisis is not new to the TDP,” he said.Earlier, party TS unit president L Ramana and other seniors such as Ravula Chandrasekhar Reddy called upon party cadre to wage a war against the TRS government.

Stay up to date on all the latest Telangana news with The New Indian Express App. Download now
TAGS
Naidu TDP AP