She everybody knows that TDP is on the verge of extinction in TS.

HYDERABAD: After Kodangal MLA A Revanth Reddy’s exit, TDP appears to be losing all its key leaders in the state one after the other either to the TRS or the Congress. Even as some of the heads of district units quit the TDP in the past one week, another senior leader, A Uma Madhava Reddy, on Friday dropped subtle hints that she too would bid adieu to the party. She said everybody knew that TDP was on the verge of extinction in TS. 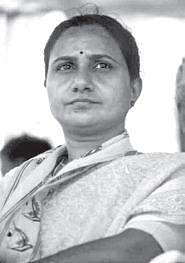 The former minister met CM K Chandrasekhar Rao on Assembly premises and submitted a memorandum seeking a house-site for her family as her husband A Madhava Reddy, the then minister in Chandrababu Naidu’s government in the erstwhile united state, was assassinated by Maoists.
About the claim of Revanth camp that she too would join Congress, she said, “Had I got clear assurance from Congress, I too would have taken the Delhi flight along with Revanth to join that party. Am I a fool to join Congress without getting clear assurance about the seat and post?”

Stay up to date on all the latest Telangana news with The New Indian Express App. Download now
(Get the news that matters from New Indian Express on WhatsApp. Click this link and hit 'Click to Subscribe'. Follow the instructions after that.)
TAGS
A Revanth Reddy A Uma Madhava Reddy TDP