Around nine gram panchayats are likely to be upgraded as municipalities in the erstwhile Adilabad district.

Municipal administrative minister KT Rama Rao recently directed district administration to collect information about gram panchayats which have over 15,000 population as per 2011 census and asked to upgrade them into municipalities. 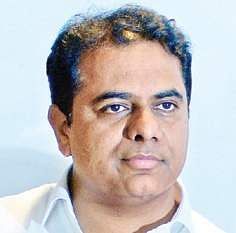 Asifabad was likely to be upgraded to a municipality, however, it was made a district headquarter after bifurcation of districts.

However, few leaders want Mavala gram panchayat to become a special municipality rather than merging with Adilabad municipality.

With the term of gram panchayat sarpanches and ward members to be completed in 2018, the government was reportedly planning to upgrade all the gram panchayats as municipalities.

Meanwhile, the officials have been collecting information in order to organise the gram sabhas. Villagers of Mudhole gram panchayat submitted an application to the Nirmal district joint collector Ch Shiva Lingiah to take steps for the municipality.

With term of gram panchayat sarpanches and ward members completing in 2018, the government was reportedly mulling over upgrading all the gram panchayats into municipalities
KTR directed district officials to collect information on GPs which have over 15,000 population as per 2011 census and upgrade them to municipalities