The Toyota Fortuner driven by the 61-year-old Telugu Desam Party leader hit the road divider and tumbled several times before crashing against a culvert. 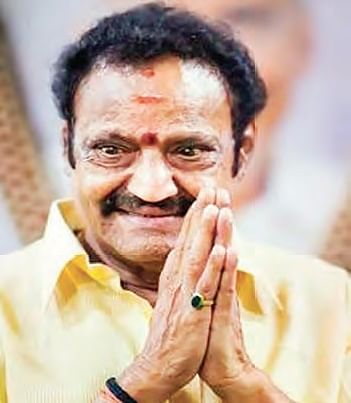 NALGONDA/HYDERABAD: Actor-turned-politico Nandamuri Harikrishna died in a ghastly road accident in Nalgonda on Wednesday.  The Toyota Fortuner driven by the 61-year-old Telugu Desam Party leader hit the road divider and tumbled several times before crashing against a culvert. Police say the accident happened as the vehicle was over-speeding. Also, Harikrishna was not wearing the seat belt which turned out to be fatal.

Son of former Andhra Pradesh Chief Minister NT Rama Rao, Harikrishna was also the brother-in-law of current Chief Minister Nara Chandrababu Naidu. He was travelling with two of his friends -- Arikapudi Shivaji and Venkata Rao -- to Kavali in Nellore district when the accident happened. Both his friends have suffered serious injuries.

According to the cops, the accident happened at around 6.10 am when the trio was nearing Anneparthy village. The impact of the accident was such that Harikrishna was thrown out of the car. He sustained head injuries and was rushed to the nearby Kamineni Hospital in Narketpally where he succumbed to injuries at around 7.16 am.

The trio started from Mehdipatnam at around 4 am. “As they reached Anneparthy, Harikrishna noticed a vehicle approaching head-on and he tried to swerve right. As he was travelling at about 160 kmph, he lost control and rammed the divider. The car turned turtle and the windshield shattered. Harikrishna was flung into air, he landed about 15 metres away,” said Nalgonda SP AV Ranganath.

Reports also say Harikrishna was trying to reach for a water bottle when he lost control. Passersby shifted them to hospital.Immediately after, Harikrishna’s sons and actors Jr NTR and Kalyanram rushed to the hospital along with other family members. Andhra Pradesh Chief Minister N Chandrababu Naidu and family also reached and the body was later shifted to his residence in the city. Four years ago, Harikrishna’s son Janakiram also died in a similar road accident on Hyderabad-Vijayawada highway.

Now we are on Telegram too. Follow us for updates
TAGS
Nandamuri Harikrishna Telugu Desam Party leader NT Rama Rao