With the Centre not fully honouring the “bifurcation commitments” and ignoring State’s pleas for allotting `50,000 crore  for its projects such as Mission Kakatiya, Mission Bhagiratha an

HYDERABAD: With the Centre not fully honouring the “bifurcation commitments” and ignoring State’s pleas for allotting `50,000 crore  for its projects such as Mission Kakatiya, Mission Bhagiratha and Kaleshwaram in the Union budget, the TRS is also gradually upping the ante against the Modi government like its Andhra Pradesh counterpart.

Ahead of his Delhi yatra aimed at extracting more funds from the Centre on Thursday, industries minister KT Rama Rao on Wednesday minced no words in “highlighting the injustice done to Telangana.”“The funds allocated to the state were not even matching the collections of movie Bahubali,’’ Rama Rao said, while interacting with newsmen here on Wednesday.  The collections of Bahubali-2  were close to `1,700 crore.  True to KTR’s comment, the allocations in the Union budget to Telangana were meagre. The extra allocations, excluding Central devolution of taxes,  a right of the states, has not crossed even `1,000 crore.

Though, the State government was not happy, the ruling TRS may not directly target Prime Minister Modi, at present. But, it will attack the BJP as a political party at the Centre.  Lending credence to this argument, KTR focussed his attack on the saffron party only. “The Union Budget is not understandable. We sought around `50,000 crore for various schemes. But, the allocations did not even match the collections of Bahubali,” Rama Rao said.  ‘’The TDP MPs and even some BJP leaders too expressed their dissatisfaction over the budget. The Centre has failed to impress anyone including its ally,” he remarked.The minister reiterated that he would take political sanyas if the ruling TRS failed to reatin power in the state in the next Assembly elections.

Industries Minister KT Rama Rao on Wednesday reiterated that he would take “political Sanyas”, if the ruling TRS failed to retain power in the State after the next Assembly polls. He then again dared TPCC chief N Uttam Kumar Reddy to accept this challenge and respond in a similar fashion.In an informal chat with reporters here on Wednesday, KTR said when he had announced in a recent meeting in Gadwal that he would quit active politics if the TRS failed to retain power, the TPCC chief responded in a different manner. Uttam said he and his wife would quit politics. 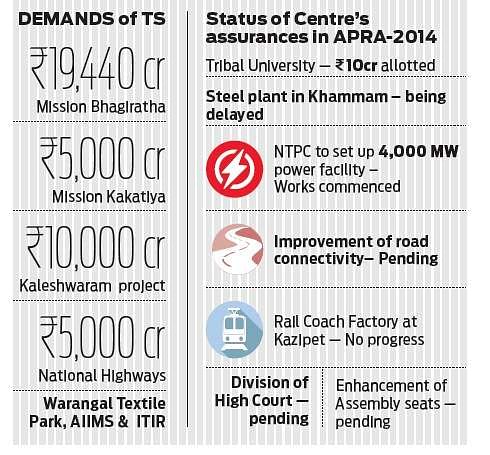 “Uttam responded in an “hermaphroditic” (Sikhandi) manner by bringing his family into the picture. I stand by my words that I will take political Sanyas if the TRS fails to retain power. Uttam too should respond in the similar manner,” he said.

KTR recalled that he made similar announcements in GHMC elections and Palair Assembly bypoll too. “We won in both the elections. Now, I am challenging Uttam to respond to my vow,” he said. “I have at least 20 to 25 years of political career. I am making this challenge, keeping my career at stake. Uttam should respond and say ‘yes’ to my challenge. He should not hide himself behind his wife,” KTR said. In more than one-and-a-half hour chat with reporters, KTR spoke on several issues including the developmental plans for GHMC.

KTR to meet Prez on Friday
KTR will leave for Delhi on Thursday to invite Union Minister Suresh Prabhu for Bio-Asia meet and Tomar for Mining conference to be held here. He will meet President Ram Nath Kovind on Friday and invite the Prez for the closing ceremony of World IT Congress. Prime Minister Narendra Modi will inaugurate the World IT Congress through video link from Delhi.

On Projects
The Mission Bhagiratha, Kaleshwaram and other schemes will create a good impression on the people. Once, the government disburses `4,000 to farmers, then they would support the TRS.
On Srinivas murder
The murder of Boddupalli Srinivas in Nalgonda is a local issue and not a state issue. The Congress is known for politics of murder. The Congress leaders are responsible for large scale of arson and killings in 1991 in Hyderabad for change of Chief Minister. Devils cannot preach gospel.