A Tragedy had just happened, and danger was still lurking. Yet, selfie-crazed crowd was all over the accident site, trying to get the best shot that they could post on social media or send to friends. 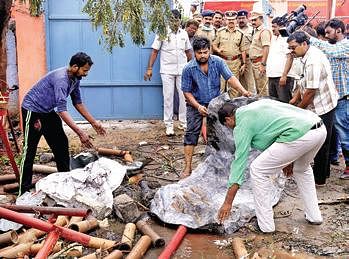 WARANGAL:   A Tragedy had just happened, and danger was still lurking. Yet, selfie-crazed crowd was all over the accident site, trying to get the best shot that they could post on social media or send to friends. As soon as news of fire accident at Bhadrakali Fireworks spread, hundreds of people poured into the spot. The traffic created by ‘visitors’ became a hinderance for fire tenders and ambulances. Police personnel blocked the area leading to the accident spot, but people managed to get inside through bylanes.

Despite policemen warning the crowd that there could be more live firecrackers in and around the unit, people kept moving closer to the site. Many youngsters were seen dodging security personnel to reach the compound wall of the unit -- all for a selfie. They had to be dragged away from the site amid rescue operations. Commissioner V Ravinder ordered for the accident spot to be cordoned off, but visits by VIPs caused further troubles amids t rescue operations.

Local leaders and politicians, unmindful of the difficulties caused by them to those involved in the operations, stood bang in the middle of the operations zone to give bytes and interviews to television channels. After the fire was put off, they even ventured inside the factory compound to give interviews from the ‘ground zero’. This, despite senior cops requesting them not to enter the factory premises. The entire venue soon started looking like a public meeting ground as thousands had gathered there. By the end of it, security personnel were seen removing parked bikes to make way for the fire tenders and ambulances to enter and leave.

Now we are on Telegram too. Follow us for updates
TAGS
Selfie-crazed mob Bhadrakali Fireworks