Thanks to local politicians, vendors continue to violate hygiene norms; shortage of food inspectors a hindrance

HYDERABAD: Hyderabadis are not new to hidden surprises in food ordered from their favourite roadside eateries or even posh high-scale restaurants. Foodies, playing a treasure hunt on their plates, have spotted dead insects, cockroaches, house flies and even rats over the years. While some cases are brought to light, thereby alerting other patrons about the ‘extra hidden nutrition’ they are served, others choose to keep mum.

Even recently, a high-scale sandwich shop in Punjagutta —a global brand that advises people to eat fresh—was found serving fresh and live cockroaches marinated in their cool drinks and meatball whoppers. The situation is no different, rather worse, at unlicensed roadside eateries and tiffin centres. Though many patrons of these hole-in-the-wall eateries proudly claim taste is inversely proportional to hygiene, a glance inside the cooking area is enough to shock the strongest hearts. 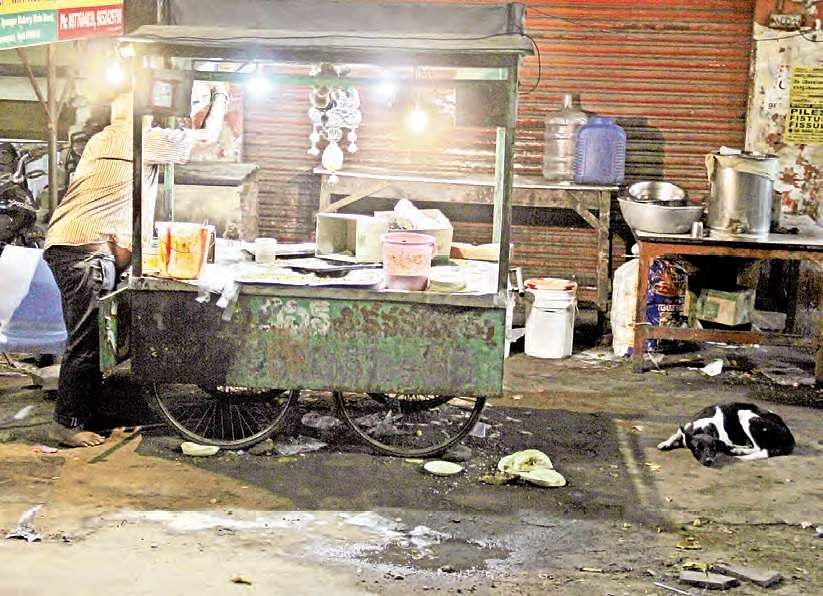 Common patrons of the roadside food, apart from homo sapiens that is, are ants, cockroaches, rats and bandicoots. Unlike us beings, these little ones tend to fall inside the cooking utensils, food or serving plates while devouring their meal. Eatery owners, cooks or workers —who are not new to these uninvited guests —often remove them and serve the food. On an off chance, they land in the plates or mouths of patrons.

Now there are countless eateries dotting the city, and GHMC officials are racking their brains wondering how they can monitor all of them. “Many establishments go unchecked as we are pressed with other key issues, including sanitation, issuing of birth and death certificates, and other administration works,” says a GHMC official.

Call up GHMC to file complaint
If  citizens find the food  they are served is unhygienic, they can file a complaint at GHMC call centre by dialling on 040-21111111. Citizens can also complain of violations like non-supply of clean water, stale food, use of banned plastic covers to the civic body.

Plates are never sterilised
Though Greater Warangal Municipal Corporation(GWMC) health wing officials claim that they conduct inspections on a regular basis and impose fine on those serving stale foods, the ground reality is different. Most of the kitchens of small restaurants and tiffin centres are poorly maintained, the water used to clean plates and dishes are of poor quality. Many eateries are run in unhygienic conditions. A large number of them do not sterilise serving plates and glasses. Meanwhile, GWMC health officer Dr Raja Reddy claimed that the corporation has been conducting inspections regularly and  imposing fines on erring establishments.

No full-time food inspector
Despite vendors flouting food  standards regularly, Mahbubnagar authorities have not been able to take any action against them. Reason: the district doesn’t have full-time food inspector. The undivided Mahbubnagar district includes Mahbubnagar, Wanaparthy , Nagarkurnool and Jogulamba Gadwal municipalities. Most of commercial establishments in the districts have been using sub-standard pulses and grains to prepare the food. Consumers, who shell out a huge amount of money at these food joints, often do fall ill. When  Express brought the issue to the notice of  Mahbubnagar municipal commissioner Surender shrugged away the blame saying that it was not his responsibility.

Are authorities doing enough?
Authorities claim that as they receive complaints, the corporation ensures that Assistant Medical Officer of Health (AMOHs) and food inspectors swing into action, inspect the place and slap fines on owners under relevant acts if necessary. However, as the officials charge paltry amounts as fines, it doesn’t serve as a strong deterrent for the violators.

According to rules, hotels and restaurants should procure food licenses under Food Safety and Standards Authority of India (FSSAI) Act. However, many hotels and restaurants operate without licenses in the city. Express found that many of them are strongly influenced by local political leaders and corporators who ensure the violators are never brought to the books.

Vendors bribe authorities
Although hundreds of tiffin centres have been set up in Khammam, lack of monitoring in these centres have led to a dip in its quality and thus, inviting diseases. These tiffin centres, most of which do not have any permission from Municipal authorities, often serve food with insects. In fact, on Wednesday a person found a cockroach in a veg biryani platter at a food court on Wyra Road in the town. When the customer asked hotel management, they allegedly tried attacking him.  One, K Madhav, an employee at a private firm alleged that the handlers of the tiffin centres bribed municipal officials to not check the quality of the food.

Hotels serve rotten meat
Lack of monitoring by municipal sanitation inspector and food safety officials give hoteliers a leeway to flout food standards on a daily basis. Hotels in Sangareddy, Siddipet, Medak, Ramayampet, Gajwel, Zahirabad, Patancheru, RC Puram and other towns in united the Medak districts do not maintain minimum cleanliness. Hotels don’t use quality vegetables and store meat for weeks in cold storage. Locals allege that hotels have been serving rotten meat to customers. Meanwhile, officials cite shortage of staff as one of the key reasons for not conducting regular checks. There are only nine food safety inspectors for 31 districts in the State.

Shortage of staff looms large
Bonagiri Srinivas, an employee of DRDA, went to a hotel opposite police headquarters in the district. When Srinivas ordered a vegetable biryani, hotel management served a foul-smelling leftover soup. A miffed Srinivas tried calling a food inspector to complain regarding the issue. It was then that he learnt that there was no food inspector available in the erstwhile Karimnagar district. In fact, he also learnt that the Municipal Corporation of Karimnagar does not have a special wing to cheque hygiene levels of hotels and restaurants. Rajendrantha, the Food Inspector of Warangal district, serves as the in-charge food inspector for the erstwhile Karimnagar.