In a conversation with The New Indian Express, Telangana state BJP president K Laxman explains the recent changes in the party’s organisational structure. 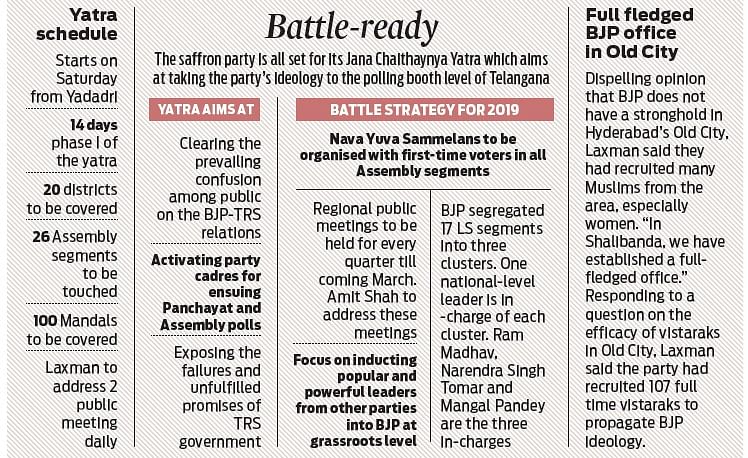 In a conversation with The New Indian Express, Telangana state BJP president K Laxman explains the recent changes in the party’s organisational structure.

HYDERABAD: BJP is known for its organisational strength and true to this, the diaries of its leaders are full till March next year with some sort of political activity everyday. “The day-wise and month-wise calender has been prepared. We have left no single day blank till March in State BJP’s diary,” K Laxman, state BJP president, informed. But, how is it possible? Laxman, in an interaction with Express editorial team on Friday, explained how the party organisation was strengthened in last two years after he assumed charge as the State BJP chief.

In each polling booth, as per the voters’ list, one in-charge is appointed for each page of voters’ list. He is called Panna Pramukh (page in-charge) who will play a vital role in the upcoming elections. This is a tried and tested formula in all States where BJP won.

“We will also identify nine newly enrolled youth voters in each polling booth,” Laxman said while giving the credit of Panna Pramukh and bringing young voters to the party to BJP national president Amit Shah.

“Winning elections in Assembly segments or Lok Sabha seats is not what Amit Shah wants. We want to secure majority of votes at booth level. This will automatically make us win the constituency. That is why the rank and file of BJP is working at booth level,” he explained.

‘Shah in TS on July 12’
Going by Laxman’s words, BJP national president Amit Shah is focussing on 120 Lok Sabha seats which BJP has never won in past, mainly in 2014. “Shah’s tours are being planned to undertake regular visits to these 120 seats. Of this, as many as 14 are in Telangana. He will come to the State on July 12,” Laxman said.

Now we are on Telegram too. Follow us for updates
TAGS
Telangana BJP K Laxman

IPL 2022: Not able to contribute to team's cause was bothering me, says Kohli