Telangana to prepare action plan to deal with Nipah virus

According to media reports, nine persons are suspected to have succumbed to the viral infection in Kerala and many others are admitted in hospitals.

HYDERABAD: Following a series of deaths in Kerala allegedly due to the deadly Nipah Virus, the Telangana Health Department officials have written to Pune-based National Institute of Virology to know more about the virus so that they can prepare an action plan to deal with the infection. They have also sought case details from Kerala.

READ: Nipah virus Explainer: All you need to know of the newly emerged disease

According to media reports, nine persons are suspected to have succumbed to the viral infection in Kerala and many others are admitted in hospitals. A team from the National Centre for Disease Control has left for Kerala to look at the impact. Wary Telangana officials are on high alert to avoid an emergency situation.

"We have written to NIV-Pune asking them to confirm if it was Nipah virus and to know more about the infection. In case anyone in Telangana is suspected to be suffering from the Virus, they have to be isolated. Separate wards would be created at Osmania General Hospital or Gandhi Hospital," said Dr K Shankar, director , Institute of Preventive Medicine (IPM)-Hyderabad.

According to World Health Organisation (WHO), when the Nipah Virus (NiV) was first identified during an outbreak of disease that took place Malaysia in 1998, pigs were the intermediate hosts. "In Bangladesh in 2004, humans became infected with NiV as a result of consuming date palm sap that had been contaminated by infected fruit bats. Human-to-human transmission has also been documented, including in a hospital setting in India.," as per WHO.

If anyone is infected with the virus, they may suffer from encephalitis accompanied by Acute Respiratory Distress Syndrome (ARDS). Other symptoms of the disease include cough, cold, high grade fever. "There is no vaccine for the disease and the treatment includes Intensive Supportive Care. I have asked NIV-Pune officials if there are any kits which can be used to test the samples in Telangana," Dr Shankar said. Currently, samples for testing have to be sent to Pune. 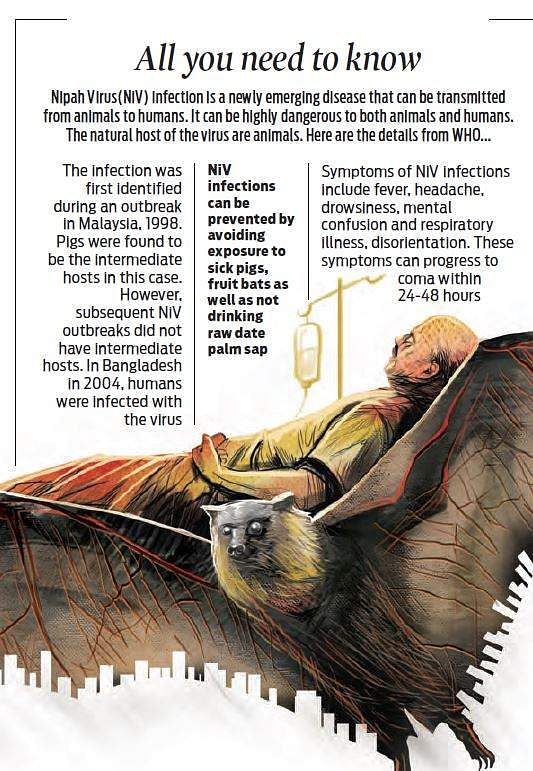 Now we are on Telegram too. Follow us for updates
TAGS
Kerala World Health Organisation nipah virus