The Congress leader wondered why TRS leaders were scary of the Grand Alliance.

“Your nephew wrote a letter to me. The letter accepted that the Congress was sure to come to power. With this the dream of winning 100 seats by TRS is shattered. Now, time has come for you to confine yourself to your farmhouse. Telangana people will enjoy freedom. A democratic and people’s government is going to be formed in the State by the Congress. I thank you for admitting your defeat and the victory of the Congress,” Reddy told Chandrasekhar Rao.

On the contents of Harish Rao’s letter, Reddy said, “It exposed your ignorance of the issues of Telangana. I pity you for your lack of knowledge of Telangana,” the PCC president said.

The Congress leader wondered why TRS leaders were scary of the Grand Alliance. “TDP was in favour of Telangana when the TRS forged an alliance with it. How has it become anti-Telangana suddenly? Harish Rao did not explain it in his letter. The TRS has no right to question the Congress-TDP alliance. We expected that the new State of Telangana would become the best in the country. But there has been no democratic rule in Telangana after the formation of the State. The Congress can single-handedly defeat the TRS. But the alliance with other parties is aimed at wiping out the TRS completely from Telangana and protecting democracy in the State. We are able to explain to people about the need for our alliance. Why is the TRS afraid of our alliance?.

“In his letter, Harish Rao said that AP Chief Minister N Chandrababu Naidu is obstructing the development of Telangana. This is nothing but your helplessness in developing Telangana and lack of sincerity to develop the State. You asked whether Naidu was a changed man now. What change had you noticed in Naidu when you invited him to the Ayutha Chandi Yagam?” Reddy asked and recalled various occasions when KCR met Naidu. “You alleged that Naidu took away seven mandals from Telangana. Why did you sit with your hands tied?. Why did you fail to launch an agitation against that decision? When AP took away Sileru and forest lands, were you sleeping in your farmhouse?” he asked. 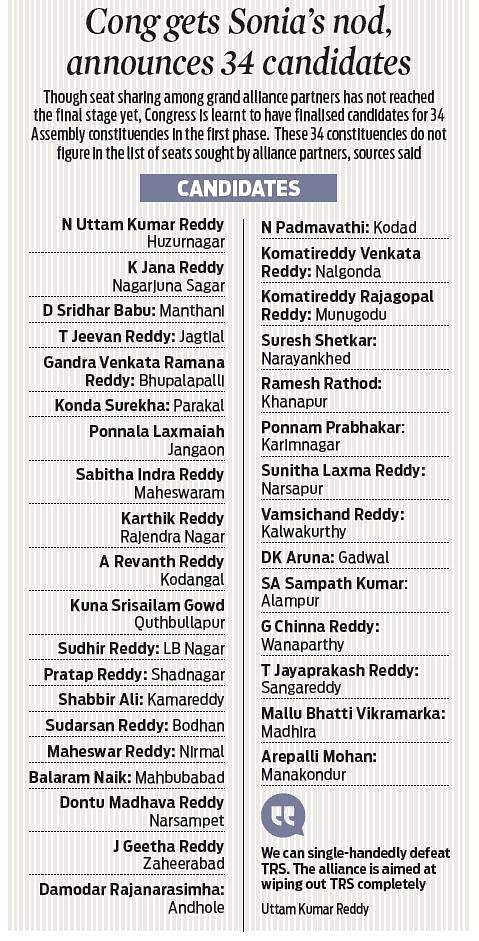 Stay up to date on all the latest Telangana news with The New Indian Express App. Download now
(Get the news that matters from New Indian Express on WhatsApp. Click this link and hit 'Click to Subscribe'. Follow the instructions after that.)
TAGS
Uttam Kumar Reddy K Chandrasekhar Rao Harish Rao letter