TRS does Sriramarakhsa, others are opportunists: Harish Rao

TRS senior leader and Irrigation Minister T Harish Rao said that  the grand alliance was a burden on Telangana and Telangana Rashtra Samithi alone could protect the interests of the State.

HYDERABAD: TRS senior leader and Irrigation Minister T Harish Rao said that the grand alliance was a burden on Telangana and Telangana Rashtra Samithi alone could protect the interests of the State.
“BJP and TDP did wrong to the people of Telangana in 2014 by allying with each other. Now Congress and TDP are only repeating this. 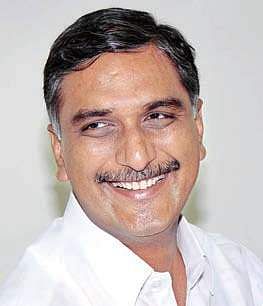 Now, they are betraying Telangana through their grand alliance. National parties are opportunistic, only  TRS can protect the interests of Telangana. Grand alliance is a burden for Telangana people,” said Harish Rao terming TRS as ‘Sriramaraksha’ (comparing TRS rule to Ram’s reign in the Hindu epic Ramayana). Harish Rao made these comments after inducting former MLA from BJP Satyanarayana and other leaders into TRS, at Telangana Bhavan on Sunday.

“TRS government is implementing more than 400 schemes aimed at the welfare of people. Did BJP government at the Centre introduce at least one people-friendly scheme? Except causing troubles through demonetisation, BJP has not done anything. It is BJP which transferred seven mandals and Sileru Power Project from Telanagana to AP. While the Centre is giving huge funds for Polavaram Project, it has been putting off repeated requests of the Telangana government to grant national status to Kaleswaram Project,” said Harish Rao criticising BJP.

As Congress is gearing up for Rahul Gandhi’s campaign, Harish Rao also targeted the AICC president saying Gandhi needed to clarify a few things first before asking for votes.

“Rahul Gandhi has promised special status to AP. If special status is given to AP, then industries and companies will shift to AP from Telangana. He should give clarity whether Congress, if voted to power at the Centre, will give incentives to Telangana on par with AP. Only after that he should ask votes,” stressed Harish Rao speaking to the newly-inducted leaders.

Grand alliance is like a circus: Srinivas Goud
TRS senior leader and former Mahabubnagar MLA V Srinivas Goud on Sunday slammed Opposition parties saying that they were raising baseless allegations against the TRS government. “They have formed a circus in the name of ‘Maha Kutami’ (grand alliance),” he said. He further alleged that Congress party’s three-day campaign in erstwhile Mahabubnagar district was a flop. “As Opposition parties do not have the strength to take on TRS, they have formed a grand alliance, which goes against all their principles and ideologies,” said Goud. He also predicted that TRS would come to power and there would be no Opposition at all this time.

Stay up to date on all the latest Telangana news with The New Indian Express App. Download now
(Get the news that matters from New Indian Express on WhatsApp. Click this link and hit 'Click to Subscribe'. Follow the instructions after that.)
TAGS
Harish Rao TRS Telangana Assembly election