The Telangana State Election Commission (TSEC) on Monday sounded the poll bugle for 120 municipalities and 10 municipal corporations in the State.

HYDERABAD:  The Telangana State Election Commission (TSEC) on Monday sounded the poll bugle for  120 municipalities and 10 municipal corporations in the State. The elections to the Urban Local Bodies (ULBs) will be held on January 22, 2020, and counting of votes and declaration of results will be on January 25.

The model code of conduct came into force with immediate effect, even as the election notification is scheduled to be issued on January 7. 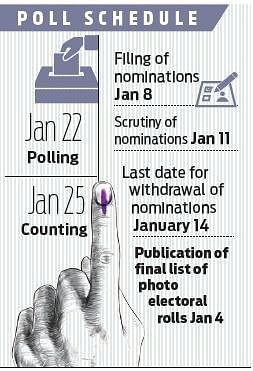 Polling will be held for as many as 2,727 wards in 120 municipalities and 385 wards in 10 municipal corporations.

TSEC Commissioner V Nagi Reddy while announcing the schedule, said that filing of nominations will begin on January 8 and the last date for submission of nominations is January 10.

After the release of draft photo electoral rolls for Urban Local Bodies (ULBs), the municipal commissioners will receive objections from voters from December 31 to January 2 and all objections will be disposed of on January 3.