HYDERABAD: Congress Legislative Party (CLP) leader Mallu Bhatti Vikramarka on Sunday claimed that the State government was planning a conspiracy to privatise the Telangana State Road Transport Corporation (TSRTC), and had hence knowingly forced the employees’  unions to go on strike.  “Chief Minister K Chandrasekhar Rao, in order to handover the RTC to a private company, has hatched a conspiracy. He knows that the corporation which is already in debts could be easily privatised,” the senior leader alleged. 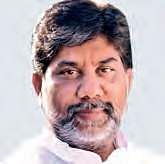 Speaking to media  persons at the Assembly media hall here on Sunday, Bhatti alleged that going by the way the State government had been handling the RTC in the last six years, it was clear that  it was pushing the corporation in to a debt trap on purpose, and creating a situation where  it could become easy to privatise it.

The CLP leader further stated that though the RTC unions served their notices two months ago, the government did not take any initiative to resolve the issue. “Instead, they constituted a three-member committee of IAS officers in the last moment as a  formality,” he added.

Mallu Bhatti alleged that the State government mortgaged the properties of RTC to make it financially weak. “We are convinced that the chief minister is preparing to hand over the corporation to a private company belonging to a ruling TRS member. People of Telangana should understand this conspiracy and resist it,” the leader said.

According to him, the private electric buses introduced by the RTC actually belongs to the person known to the CM, and hence, the management was being allowed to utilise all the benefits being provided by the Centre. Without calling tenders, he allowed Olectra company to lease out their buses to the RTC, he further alleged.

Meanwhile,  Congress MP A Revanth Reddy wrote an open letter to the chief minister, demanding to immediately resume dialogues with the RTC union and resolve the matter amicably.  He took strong exception to the minister threatening the employees with terminating from the services and stated that such threats did not work in a democracy. “The RTC is not your (KCR) private limited company, nor are the employees your servants, to throw them out of job whenever you wish. There is law and courts in this country,” he said.

Stand with the working class: Uttam berates CPI
TPCC chief N Uttam Kumar Reddy on Sunday urged the CPI to reconsider its support to the pink party in the upcoming Huzurnagar Assembly bypoll. “The CPI  should withdraw its support to TRS and tell the working class of the State that they are with them,” Uttam tweeted. “CPI party has historically been fighting for the rights of labourers. If they support TRS while the government is trampling on workers rights, this will be blot on CPI,” he said. Meanwhile, CPI State secretary Chada Venkat Reddy, while extending his support to the RTC employees’ strike,  urged the State government to clarify its stand on merging RTC with the government and take steps to resolve the issues

Now we are on Telegram too. Follow us for updates
TAGS
Congress Legislative Party CLP Mallu Bhatti Vikramarka TSRTC CM KCR TSRTC UNION tsrtc merger ay urged the CPI to reconsider its support to the pink party in the upcoming