Thanks to abundant rainfall, demand for power drops in Telangana

Less demand leads to TS GENCO backing down some units of the thermal power stations.

HYDERABAD: Thanks to good rains and heavy inflows into projects on Krishna river, the demand for power was very low in September and October. As a result, the TS GENCO is backing down some of the units of the thermal power stations and not purchasing power from the exchange. 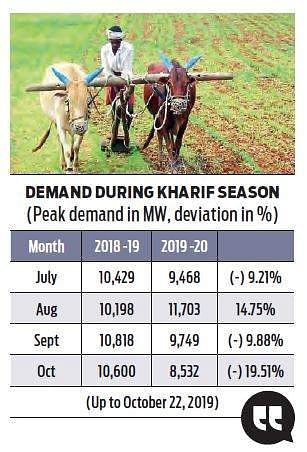 “The lower than usual Kharif demand, high hydel generation and non materialisation of lift irrigation loads during this year are unexpected, which resulted in backing down of thermal stations and payment of fixed cost to generators. With these wide variations in demand and availability, TS GENCO is maintaining optimum load generation balance by ensuring grid security," said the GENCO officials.

Generally, the peak demand for power in Kharif season will be from August to November. And the entire Southern Region will be normally under critical power situation during September and October, due to agriculture operations. But this year due to persistent and rigorous monsoon, the power scenario in the State and Southern Region has changed to surplus when compared with previous year.

Due to continuous rainfall in Karnataka and Maharashtra, the inflows into Krishna basin are at a historical high to the tune of 1,345 tmcft this year, as of now. In Telangana, the major hydel power stations are on Krishna basin and all the hydel generation stations are continuously kept in service. About 2,716 MU of power is generated from hydel generating stations as of now this year, with a peak generation of 2,211 MW on September 24. The generation during the previous year was 1,364 MU during the same period, officials explained.