According to a recent report by SIAM, the manufacturing of vehicles all across the country had come down by 33 per cent.

HYDERABAD: Chief Minister K Chandrasekhar Rao, who has always, admittedly, been confident about the State’s economy till now, said he had regrets for the first time ever on Monday. The major reason for this “regret” was the slowdown of the economy, which has impacted the State’s revenues and also slashed the amount of Central money flowing into Telangana.

Rao said: “The economic slowdown has adversely impacted all sectors. There is  negative growth in many key sectors, which mirrors the prevailing economic situation. Official data put out by institutions connected with these sectors indeed present a gloomy picture.”

According to a recent report by Society of Indian Automobile Manufacturers (SIAM), the manufacturing of vehicles all across the country had come down by 33 per cent. The sale of vehicles has come down by 10.65 per cent. Since there are no buyers for vehicles manufactured already, several top companies have stopped production temporarily. Taxes from purchase of vehicles has stopped. Sale of petrol, diesel, and auto spare parts has also declined, resulting in fall in VAT collections. Lakhs of people have lost their jobs and employment opportunities, he said.

The fact that about 3.5 lakh persons lost their jobs in the automobile sector shows how severe the situation is, said Rao.

Since there is a fall in the demand for all commodities, railway wagon booking growth rate declined from 4.1 per cent to 1.6 per cent. As several industrial units have closed down, coal mining has stopped at several mines. With this, the growth in coal mining also decreased from 10.6 per cent to negative 5.1 per cent. “The Rupee exchange value is falling rapidly and steadily. For the first time in history, the US Dollar is valued against Rs 72.43. All facts and figures that I have stated are being talked about on a daily basis all over the world,” said the chief minister.

“The severe financial crisis that the country has been witnessing has impacted Telangana State’s economy too. In the first year of GST implementation, in the absence of any proper calculations, Telangana got compensation as was done in the case of all other States. After this, there was no necessity for Telangana to take this compensation again. But due to economic slowdown, Rs 175 crore during April and May months this year, and Rs 700 crore during June and July, was given as GST compensation. The compensation taken during June and July was four times more than the compensation given in April and May. This alone reflects the steep decline in the financial situation,” Rao explained.

The chief minister said, “In the past five financial years, in commercial taxes, the State recorded an average of 13.6 per cent growth rate. In the first four months of this financial year, this figure is 6.61 per cent. In Excise, in the same period, only 2.59 per cent growth has been registered. In Stamps and Registration, till the last financial year, we recorded a growth rate of 19.8 per cent. But, these four months, it fell down to 17.5 per cent. In motor vehicle taxes, there is a steep fall— from 19 per cent the last five years to negative 2.06 per cent these four months.”

There is a steep decline in the non-tax revenue too. “Till last year, the growth rate was 14.9 per cent on an average. During the first four months of this financial year, it fell down to negative 14.16 per cent. In all, the non-tax revenue declined by 29 per cent,” Rao said

“The situation in many other States is much worse than ours. According to a CAG report, Punjab, Karnataka and Haryana have registered a negative growth rate. Telangana is in a slightly better position. We have been able to raise funds from other financial institutions because of the leverage we have due to our economic growth and fiscal discipline,” said Rao

The State government plans to bypass banks for the implementation of farm loan waiver this time. The money will be given directly to individual farmers, said an official. “We are planning to give the money to farmers directly, who will then use it to repay their loans. But we have not decided if the money will be transferred to the farmers’ accounts directly or be given to them in the form of a cheque,” said the official. He added that the State has allocated Rs 6,000 crore for the waiver, and implementation is likely to begin in December. “The waiver will be implemented in four or five installments,” he said 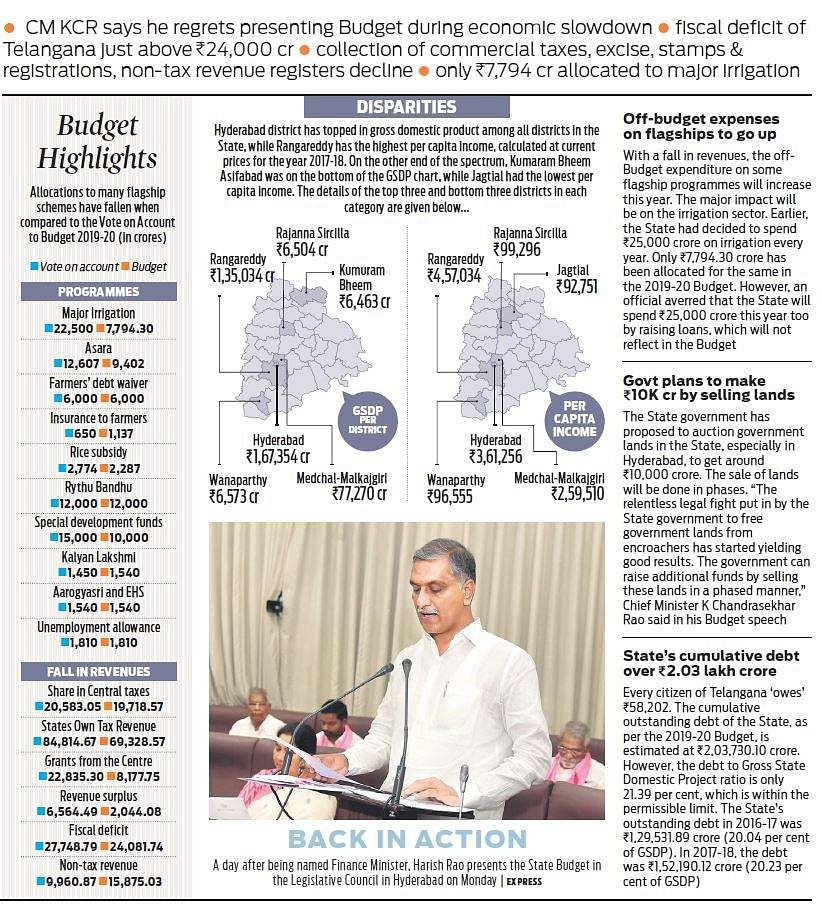 Stay up to date on all the latest Telangana news with The New Indian Express App. Download now
TAGS
Telangana budget Chandrasekhar Rao