SRSP rejuvenation scheme likely to be inaugurated before Dasara

The engineers have expedited the work and the project is expected to be completed by the end of August.

NIZAMABAD: The Sri Ram Sagar Project (SRSP) rejuvenation scheme is expected to be inaugurated by Chief Minister K Chandrasekhar Rao before Dasara this year. The project on Godavari River has not received estimated inflows in the last few years. Only on a few instances of heavy rain was water released into the Godavari. In short, SRSP water has hardly been available for irrigation purposes throughout the year. 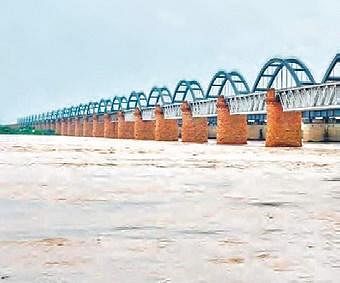 The Chief Minister, therefore, had decided to undertake the SRSP rejuvenation scheme at an estimated cost of `2,000 crore, so that the project is supplied water through the Kaleshwaram Lift Irrigation Scheme (KLIS). The scheme’s objective is to ensure that the project has water perennially. It further proposes to identify new crop areas where water can be supplied using the existing network of canals.Water from the KLIS would reach the SRSP via its existing Flood Flow Canal. Three pump houses would be used to pump water into canals. The construction of two of them has been completed.

The engineers have expedited the work and the project is expected to be completed by the end of August. “All the civil works have been completed. Electrical works, including motor fitting, are underway. It will be ready by the end of August,’’ Flood Flow Canal (FFC) executive engineer Maloth Sudha Kiran said. After the inauguration of the scheme, water from KLIS would be pumped into SRSP based on requirement.

More from Telangana.
Now we are on Telegram too. Follow us for updates
TAGS
SRSP rejuvenation scheme Sri Ram Sagar Project