A visibly delighted Chief Minister K Chandrasekhar Rao on Thursday congratulated IT Minister KT Rama Rao and Principal Secretary Jayesh Ranjan for the impressive strides the State has made in IT exports and said that by continuing to log in impressive growth figures year after year, Telangana has become the destination of choice for IT majors. The figures also showed that Telangana’s employment rate growing at 7.2 per cent compared to the national average of 4.93 per cent or the rest of nation average of 4.59 per cent.

‘IT ecosystem can fight Covid effect’ 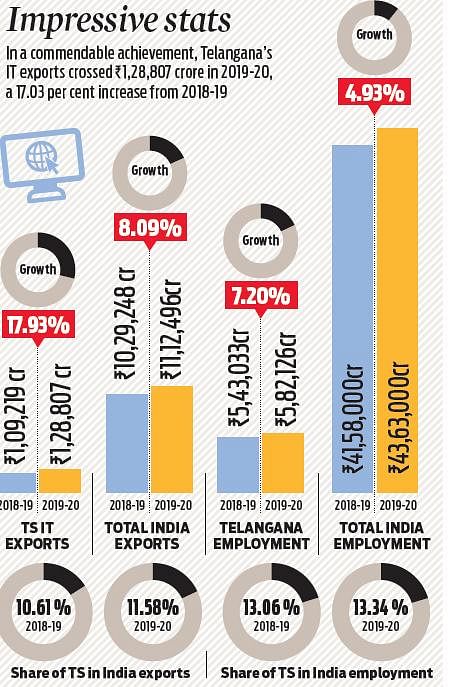 IT Minister KT Rama Rao, who met the Chief Minister along with Principal Secretary Jayesh Ranjan, said that IT eco system has the resilience to overcome the effects of Covid-19 and pointed out that several investors are actively engaged in discussion with the department and very soon, there will be some announcements in this regard.

The Minister said in 2019-20 several marquee investments took place in Hyderabad, including Amazon’s world’s largest facility in 3 million sq ft and Micron’s largest R&D centre. Tech Mahindra and Cyient have chosen to open their centres in the Tier II city of Warangal, he added. The State government is also promoting dispersion of the IT around the city with several MNCs showing interest in the eastern part, he said, while pointing out that the commercial space absorption during the first two quarters of 2019-20 topped all metros in the country.

Stay up to date on all the latest Telangana news with The New Indian Express App. Download now
TAGS
Telangana IT exports