Meanwhile, Sawhney congratulated Telangana Team for achieving 18 per cent growth in IT exports in these challenging times.

HYDERABAD: IT and Industries Minister KT Rama Rao on Friday urged the Centre not to ‘restrict’ sops to States and allow more facilities and autonomy if a State needs it. Rama Rao, addressing a CII Telangana-organised webinar on digital revolution, said this in context with the need of more industrial parks in Telangana. Union IT Secretary Ajay Sawhney also attended the webinar. 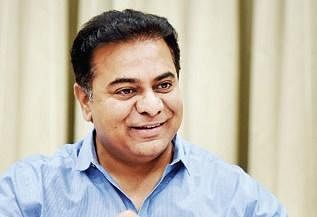 KTR said there is an opportunity to bring businesses from China in this current situation and that Telangana needs two more industrial parks for this. “I had apprised the same in a letter to Minister Ravi Shankar Prasad,” he said.

He said States should be allowed to install their own satellite system in the orbit. Sawhney said the Centre was coming up with the Electronic Manufacturing Cluster 2.0, under which States could set up more industrial parks.

Meanwhile, Sawhney congratulated Telangana Team for achieving 18 per cent growth in IT exports in these challenging times.