HYDERABAD: Union Minister for Jal Shakti Gajendra Singh Shekhawat on Tuesday heaped praises on the State government for providing safe and piped drinking water to 98.4 per cent households.  Telangana topped among all the big States in the country in providing safe drinking water, the Gajendra Singh said and appreciated the government for completing the project in a mission mode within four years. Gujarat stood in the second place by providing water to 80.59 per cent of the total households.

The Union Minister held a virtual conference with Ministers and officers of all the States to review the implementation of Jal Jeevan Mission in rural areas. The Centre’s aim is to provide safe drinking water to 19 crore households by 2024.

Gajendra Singh said that Goa had already achieved the target of providing tap water connections to all rural households. He added that Telangana, Puducherry, Gujarat, Haryana and Himachal Pradesh were among the States that had shown a good pace in implementation of the mission.

Participating in the meeting along with chief engineers, the Mission Bhagiratha consultant M Narsing Rao participated in the meeting. However, Narsing Rao claimed that Telangana had achieved 100 per cent target and stood number one among all the States.

He said that all the 54.38 lakh rural households have tap connections. But, the data of beneficiaries and Aadhar cards have been uploaded for only 53.51 lakh households on the Central government’s Integrated Management Information System (IMIS) portal. Thus, the Centre thought that TS had achieved 98.4 per cent target.

He said that the total households in Goa were just 2.63 lakh. Gujarat was implementing the programme for the last 15 years, but the TS has completed the project within four years under Mission Bhagiratha, Narsing Rao added. 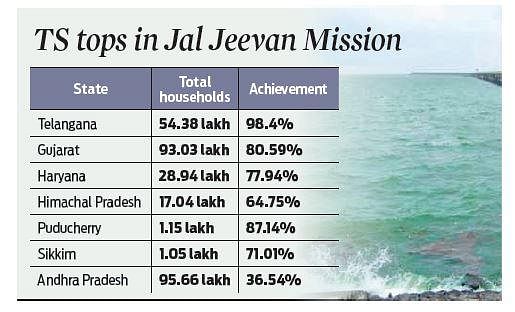 Now we are on Telegram too. Follow us for updates
TAGS
drinking water Telangana