The reservations in employment and education for creamy layer of BCs should be abolished too.

HYDERABAD: Activists of the National Backward Classes Welfare Association staged a dharna in Hyderabad on Tuesday demanding that the Centre implement 50 per cent reservation for BCs in legislative bodies and form a BC Ministry. 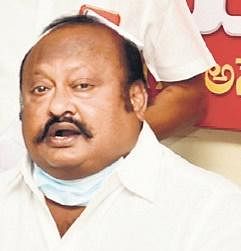 Krishnaiah said BCs will get justice only if 50 per cent reservation was given to them in the Parliament and other legislative bodies and even in the private sector. There was no BC representation from 20 of the 33 districts of Telangana. Of the 29 States, there are no BC MPs from 18, he said. Krishnaiah said of the 129 backward castes in the State, people from 119 castes had never been elected to the Assembly.

The reservations in employment and education for creamy layer of BCs should be abolished too. Also, the Centre should chalk out a BC plan with Rs 2 lakh crore.

Now we are on Telegram too. Follow us for updates
TAGS
National Backward Classes Welfare Association R Krishnaiah