HYDERABAD: Despite the high level of rice production in Telangana, the State’s figures when it comes to exports in rice are negligible when compared to other states. A report in this regard, prepared by the Federation of Telangana Chambers of Commerce and Industry (FTCCI), commissioned by the State Planning Board, was submitted to TSPB Vice Chairman B Vinod Kumar on Wednesday.

In the report, FTCCI outlined the high transportation cost for exporters from Telangana, high levels of pesticide residue in rice produced here, lack of proper warehousing facilities and the shift in cultivation of paddy variety from long grain to short grain, as few of the major reasons behind the low export.

Firstly, the report states that since Telangana is a landlocked State, exporters were facing a high cost to transport their wares to the Nhava Sheva port in Mumbai, Chennai port or to the Krishnapatnam port in Andhra Pradesh. “Transporting rice is costing exporters and no concessions are offered by either CONCOR (Container Corporation of India Ltd.) for railway freight or the State ICDs (Inland Container Depot),” the report stated, adding that terminal handling charges (THC) to send consignments were also high.

Secondly, the report pointed towards the use of pesticides in Telangana, which is higher than the permitted levels in other countries. “Exporters from Telangana complain that the rice cultivated by farmers contain pesticide residue of a much higher level than the permitted levels as per guidelines of respective countries,” the report stated. Arsenic contamination of groundwater is also another reason.

The State government’s commitment to implement 100 per cent MSP for farmers is also discouraging exporters to come to the State, due to the high procurement price. Concerns regarding the warehousing facilities were also raised in the report by FTCCI. “Small testing centres are to be set up in major towns so that farmers/traders need not travel to Hyderabad to get the samples tested,” added the report.Another significant point highlighted is that of Telangana’s shift in cultivation from long grain to short grain. Exporters say there is demand for only long grain rice in the international market. 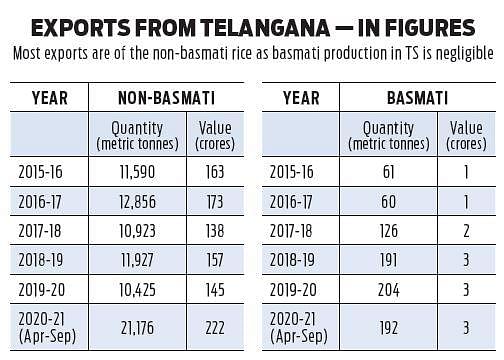 Now we are on Telegram too. Follow us for updates
TAGS
rice exporters Telangana