The officials have tried using several tactics, such as fixing 15-day deadlines and pressuring the residents to vacate the villages, but in vain.

SIDDIPET: The residents of two villages in Toguta mandal of Siddipet district are resisting the attempts, including psychological, of the district administration and police to evacuate them before their houses come under a sheet of water once the Mallanna Sagar project is launched in three to four months.

They are not ready to vacate their houses and land in Etigadda-Kistapur and Vemulaghat villages as they feel that the compensation being offered to them is low. While they continue to hold their ground, the officials, who are racing against time to meet a deadline, are using every trick in the bag to empty out the villages.

Recently, the officials released 0.1 tmcft of water from the project’s surge pool into the reservoir, which the residents said was a tactic to frighten them. But according to the officials, they did this only to allow some water to sink into the pits dug up as part of the construction of the project. Etigadda-Kistapur and Vemulaghat, along with six other villages — Lakshmapur, Brahmana-Bandarupalli, Erravalli, Singaram, Palle Pahad and Rampur — face the threat of submergence. While most of the people in the six villages have been shifted to rehabilitation centres, the farmers in the first two have made it clear to the officials that they will not budge unless they receive the complete Rehabilitation and Resettlement (R&R) package.

The officials have tried using several tactics, such as fixing 15-day deadlines and pressuring the residents to vacate the villages, but in vain. “Police keep on increasing the heat on us. The officials are also trying to unsettle us by setting deadlines. They are trying to forcibly evacuate us, like they did with the people of Bylampur and Kondapochamma overnight,” Ashok, a resident of Etigadda-Kistapur, said.Many residents said their intention is not to create trouble for the government. “We are ready to leave our homes if we are paid the compensation and benefits which were promised to us and those who are 18 years old and above. The government had also promised houses for single women and men as part of the R&R package,” Ashok said.

Srinivas Reddy, a resident of Vemulaghat, said: “The authorities have been forcing us to move out in the next two months so that they can fill the reservoir with Godavari water from the surge pool. They have even closed the road to Siddipet from Etigadda-Kistapur,” he said.The officials have increased police presence in the villages, which has left the residents feeling eery. “Our villages are not Naxal-affected. But this heavy police patrolling makes one wonder if these are affected. It is unwarranted,” another resident said. 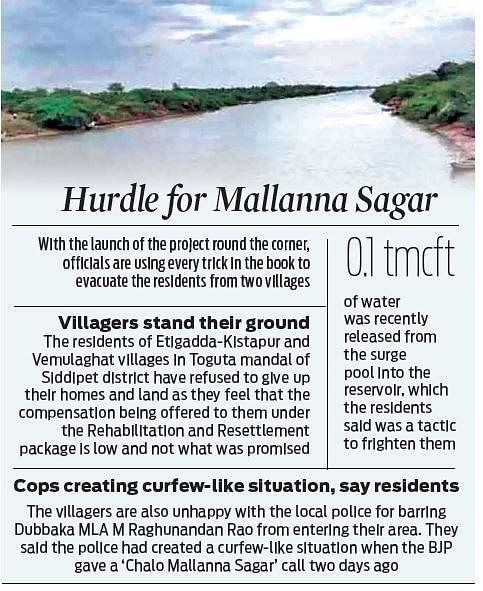 Now we are on Telegram too. Follow us for updates
TAGS
Mallanna Sagar Siddipet Telangana