Delhi is still struggling to have the basics of women safety in place.

New Delhi: While crimes against women have touched new highs since the Nirbhaya gang rape in 2012, Delhi is still struggling to have the basics of women safety in place. A newly-reconstituted Special Task Force (STF) for safety of women is still discussing the same points that have been under consideration for almost a year, which shows the lack of progress in this regard.

The STF was reconstituted in January under the chairmanship of the Lieutenant-Governor in the wake of a query by the High Court on women safety in the Capital. The 12-member panel includes the Delhi Commission for Women's chairperson, Delhi Police’s special CP (women safety), chief secretary and the special commissioner transport.

A meeting called by L-G Anil Baijal this month reviewed the action plan to make Delhi safe, which included measures such as more PCRs, recruitment of additional police personnel, institution of fast track courts, lighting up of dark areas etc. But these points had come up at a review meeting of the Home Secretary in May last year as well. 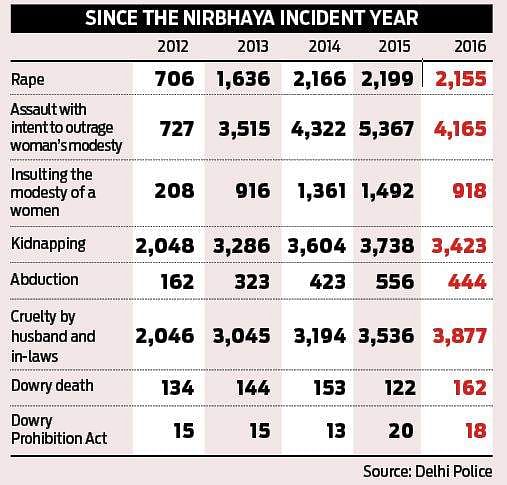 While the officials keep debating on what requires to be done, crimes against women have seen a three-fold increase in past four years. In 2012, Delhi Police had registered 706 cases of rape, while in 2016 more than 2,100 such cases were registered. Similarly, the number of molestation cases was 727 in 2012, but in 2016 nearly 4,165 cases were registered.

At the L-G’s review meeting, Delhi Police stressed that there was urgent requirement of additional 66,000 cops, but only 2,000 had been recruited. Similarly, a Delhi police proposal made in 2015 for the acquisition of 500 more PCR vans is pending.

“Now, the members have been asked to give new ideas,” a senior official said.

The L-G has directed that a sociological study be conducted on the cause of rapes, including the psycho analysis of the accused. The team has to submit its report by June.