The so-called unity within the Chinese Communist Party is in tatters as all three factions are involved in a bitter feud.

NEW DELHI: Balkanisation of China seems to be imminent. The so-called unity within the Chinese Communist Party is in tatters as all three factions are involved in a bitter feud. This is likely to intensify in the coming months, triggering the beginning of a revolution and then disintegration of the country into seven independent territories.

The Shanghai faction, led by Jiang Zemin, and Hu Jintao-led Beijing faction are caught in a covert war with Zhenjiang faction, led by President Xi Jinping, and each one is trying to eliminate the influence of the other in the dirty political game. And, behind the scene is a massive labour unrest, pro-democracy protests against the present regime that hardly find mention in the highly-censored national and international media.

Spies and analysts closely monitoring the growing turbulence in China believe that the collapse is likely to be expedited as unprecedented crackdown against opposition and disappearance of lawyers and human right activists is causing massive chaos in the Chinese hinterland.

Unprecedented crackdown on opposition and disappearance of lawyers and human rights activists is causing massive chaos in the Chinese hinterland. “Thanks to brutal control over media, China has managed to mute news reports about hundreds of protests in provinces. But some underground activists have provided details on what we now know as a major uprising against the Xi Jinping regime ahead of 19th National Congress of the Communist Party,” sources said.

“China is finally reaching a tipping point and Xinjiang, Manchuria, Hong Kong, Tibet, Chengdu, Zhangzhung and Shanghai could turn into free nations after a Chinese revolution.” They added that the Chinese government is trying hard to keep the focus on the Doklam standoff and North Korea’s nuclear posturing against the US to rally support for Jinping. Teng Biao, China’s best-known human rights activist and lawyer, told The Sunday Standard from New York that China is escalating the standoff and Jinping is using the occasion to galvanise his dwindling support base.

Teng said some anti-India demonstrations in China are being sponsored by the ruling Communist Party. He also said pro-democracy activists are quietly working to engineer a revolution against China’s one-party rule to install a democratic government.

“We don’t know whether it will take five or 10 years. It is clear that we are not waiting but preparing for another revolution like 1989. Despite the crackdown on social media and blogs by the Jinping regime, activists and lawyers are using other medium to ship out information and assist the revolution,” Teng said. 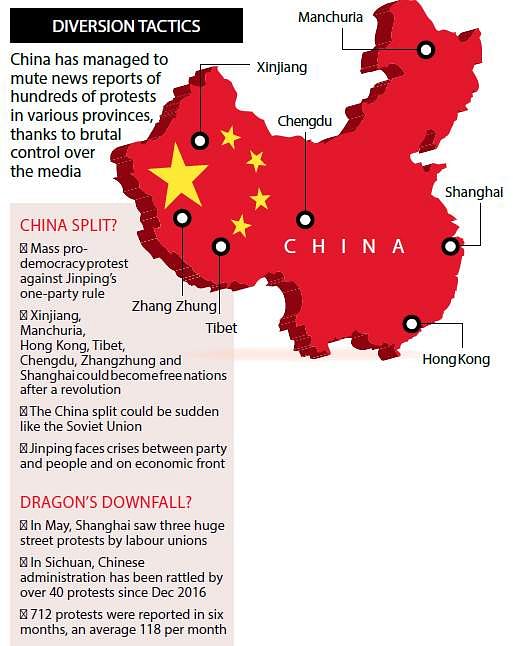 “The main objective of the Chinese Communist Party is absolute monopoly by any means but we have strengthened the rights groups since early 2000 that have given us the possibility for revolution. The Communist Party, led by Xi Jinping, is also facing major crises between party and people, and an economic crisis.”

“More and more people are deciding not to believe in Jinping’s propaganda. The gap between poor and a handful of rich is widening. Only people with close connections with the top leadership and Jinping are prospering and that is the reason people don’t see a political reform in the Communist Party but they want to uproot it,” Teng, who was earlier jailed by the Chinese regime for pro-democracy support, said.
Several groups from Afghanistan recently renewed support to Xinjiang region that was once dominated by around 10 million Muslim ethnic Uyghurs. China had cracked down along the bordering areas of Afghanistan after Chinese Intelligence Ministry of State Security reported trained jihadists returning to Xinjiang.

According to sources, the latest round of flashpoint was over language, that started in Hotan town of Xinjiang in early July 2017 when the Chinese government decided to withdraw Uyghur language from schools, making Mandarin compulsory.

“This was another blow after banning the fast during Ramzan. In the last six-seven months, the Chinese government has issued several policies targeting Muslims in Xinjiang, that is likely to explode soon,” sources said. Manchuria is another tipping point where simmering labour unrest since 2008 is turning into a full-blown rebellion. Sources said in 2010-11, the government faced over 1.5 lakh pro-democracy protests and riots and the number has been on the rise.

In the backdrop of the Doklam face-off, information about 137 bloody protests in Xinjiang in July was shipped out by the underground activists. Data suggests on an average four protests were mounted against the regime daily despite the brutal suppression by Chen Quanguo, chief of the party in Xinjiang. Similarly, 103 protests in the same month were reported from Chengdu, capital of Sichuan Province; a majority of them were launched by democracy supporters. Since the death of Nobel laureate Liu Xiaobo and his subsequent ocean burial set off protests against the Communist Party in mainland China and Hong Kong.

Hang Tung Chow, an activist and lawyer in Hong Kong, believes that Chinese disintegration could be sudden like Soviet Union, dragged down by its own bureaucracy and faction fighting. “The Chinese Communist Party has mounted mass arrests in recent years, causing the disappearance and silencing of many activists,” Hang told The Sunday Standard. The party, while assessing the shortcomings of Mao policy in a closed-door meeting in June 1981 had admitted that it still suffers from shortcomings and mistakes, and inner-party unity and harmony between the party and people are the basic guarantee for Chinese socialist modernisation. The guarantee seems to be fading.