HYDERABAD: Fifteen more Tollywood personalities are likely to receive notices from the Telangana excise department in the coming days as part of its investigation into a Hyderabad-based drug racket busted recently. This would take the total number of notices issued to members of the film fraternity to 27.

Sources in the know say that those likely to receive notices include a star of a blockbuster Telugu franchise, a high-profile producer, popular music director straddling Tamil, Telugu industries and two leading actresses.

The eldest son of a veteran producer is among those likely to be called for questioning as is a popular character actor gearing up for a big release. A few upcoming actors are also likely to be summoned.
However, all of this is likely to happen while the man at the centre of the probe, Akun Sabharwal, the director (enforcement) of the excise department, is away on leave— news that raised eyebrows.
The officer, who initiated the probe that unearthed the racket, insisted his leave was for personal reasons related to his mother’s recent demise.

Meanwhile, some of the 12 Tollywood personalities, who reportedly received a notice, clarified their position last week. Others either denied it or chose to keep mum. The excise department, refusing to confirm any of the names, said 10 people had officially acknowledged the notice. 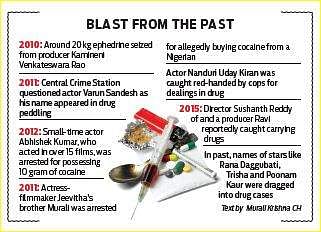 Sabharwal said those summoned would have to explain why their personal mobile numbers were found on phones seized from the drug peddler Calvin Mascaranhas (who is now in the jail) and explain their alleged links with him.

Actor Navdeep confirmed he had received a notice from  the Excise department and gave an insight into what his explanation will be: His name may have popped up on the anti-drug radar but only because he was associated with a number of event management companies including one that had  a poor reputation. “They (these companies) could be associated with Calvin Mascarenhas and I think that’s why I have been summoned.”

Actor Subbaraju said he hasn’t even seen Tollywood stars indulging in drugs. He supplied a certificate of character for all the other 11 Tollywood invitees. Not one of them is a drug user, he said.

Meanwhile, answering a query on the summons sent to two actresses, Sabharwal said women have the choice of presenting themselves before the officials at any other place of their choice.