Gagging the sound of silence

For 25 years, aggreived citizens gathered at Jantar Mantar to bring their protests closer to the doors of power and get their voices heard. Now, the NGT order has left them dejected and outraged.

NEW DELHI: A lone Delhi police van parked at a corner, a few barking dogs toiling with an overfilled dumpster, a handful of people gulping down cheap South Indian snacks at a dingy eatery and a bleak emptiness is what now occupies the Jantar Mantar Road in the heart of New Delhi.

The road was not always as lifeless as it seems today. Till a few days ago, it was thriving and pulsating with high-spirited citizens of the country, who gathered here from all corners to bring their fight to justice closer to the doors of powers.

With the 18th-century Jantar Mantar observatory standing as a silent watchman in the background, and the Raisina Hill at a distance of three km, the road has been witness to countless outbursts of dissent and protest in the last 25 years.

But the recent ban imposed by the National Green Tribunal (NGT) on protests and dharnas at Jantar Mantar has robbed the aggrieved citizens of their favourite protest spot. Ramlila Maidan, the new venue, is simply out of the reach for most people.

A military veteran from Haryana who was busy packing his belongings said: “Our right to protest is severely affected. We cannot afford to rent the Ramlila Maidan. Why must we rent the entire ground for a protest by four people?”

The ban came after area residents complained that the agitations and processions violated their right to live in a peaceful and healthy environment. The protestors claim they never violated the rules and used loudspeakers only in the allotted time of 10-5 pm.

“It was only a conspiracy to uproot the One Rank One Pension protestors. The NGT has done nothing about so many environmental issues in the city but was determined to eradicate pollution from Jantar Mantar. Why?” the veteran asked bitterly.

Another protestor said, “If we have to pay money for protesting, the government indirectly wants to tell us that we cannot protest. It reminds me of the Emergency. Our democracy is at stake.”

Even political parties are peeved. Delhi Pradesh Congress Committee spokesperson Chatar Singh says, “Our party has protested at Jantar Mantar several times. Its proximity to the seat of power is a very important factor. Who will listen to us if we protest in Burari? This NGT’s decision hampers the spirit of democracy.” 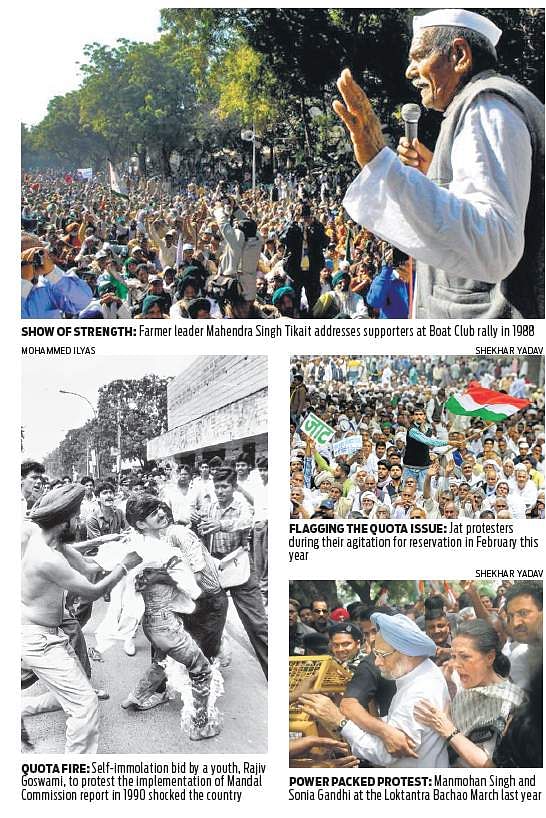 Long before Jantar Mantar became the hub of protests, small rallies were held at Boat Club near India Gate. In the 1970s and ’80s, large political rallies were held at Ramlila Maidan. It was the spectacular show of strength by Mahendra Singh Tikait, the farmer leader from Uttar Pradesh, in 1988 that lead to the change of official venue of protest to  Jantar Mantar. Nearly five lakh farmers who had accompanied Tikait to Delhi in their bullock carts cooked, cleaned, milked their cattle and defecated in the neatly mowed lawns of Boat Club.

Since then, from ageing farmers in their dhotis to middle-aged anganwadi workers, turbaned jat farmers, disgruntled MNREGA workers, displaced tribals, military veterans, student leaders and political organisations, all have gathered at the Jantar Mantar Road to get their voices heard.

Speaking to The Sunday Standard, C Kesavan Putty, owner of the South Indian eatery, said, “I have been running this shop for 25 years. I have seen it all.” Pointing at a tree right across the street, he said, “This is where Anna Hazare and Kejriwal used to sit.”

History Professor Rizwan Qaiser of Jamia Milia Islamia recalls the days when he had participated in the Narmada Bachao Andolan led by Medha Patkar at the venue. “I went there with my college mates. I still remember Patkar was fasting unto death for the poor, displaced tribals and we all joined her,” he said.

The road was home to many dissenters who had camped here for years waiting for justice. Jagjit Kaur, a 47-year-old rape victim from Punjab, came here five years ago and has not left since then.
“I want to ask the NGT, do my tears cause pollution?” she said. “I have wasted my five precious years here waiting for justice and now I have nowhere to go. I can’t afford to pay `50,000 for Ramlila Maidan. I have no money.”

Stay up to date on all the latest The Sunday Standard news with The New Indian Express App. Download now
TAGS
National Green Tribunal Jantar Mantar One Rank One Pension Ramlila Maidan