Her saffron rivals may swear by the Ram Temple, but Gulshan Bindu idolizes Lord Ram. That is the reason Bindu, born in Bihar and brought up in Delhi, decided to make it her permanent abode 12 years ag

AYODHYA: Her saffron rivals may swear by the Ram Temple, but Gulshan Bindu idolizes Lord Ram. That is the reason Bindu, born in Bihar and brought up in Delhi, decided to make it her permanent abode 12 years ago.

Since then, she has been striving to make, as she claims, the words of Lord Ram true that in Kalyug, Ayodhya will prosper only when ruled by a transgender.

Head of the local transgender community, Bindu is now in fray for the first mayoral fight in the newly formed Ayodhya-Faizabad Municipal Corporation. This is her third big election in the past five years.

Ironically, it’s the Samajwadi Party that has fielded her despite her vow to get a Ram Temple built at the disputed site.

After coming to Ayodhya, Bindu gradually made her presence felt with her social works. As her popularity rose, she was confident enough to challenge veteran BJP MLA Lalloo Singh in the 2012 Assembly elections. She got more than 22,000 votes and became instrumental in the defeat of Singh, who lost to greenhorn Pawan Pandey of SP by a margin of 5,000 votes. 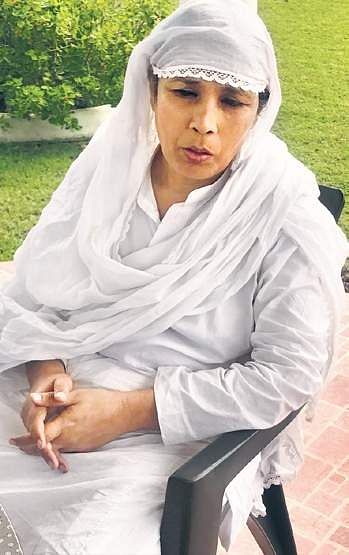 Bindu again tried her luck in civic polls the same year for the post of Faizabad Nagar Palika chairperson as an independent candidate. Though she lost to BJP’s Vijay Gupta by a slim margin of just 250 votes, she managed to emerge as a force to reckon with on the political landscape of the twin town, unleashing a competition among parties to win her support.

Now, as a candidate of a prominent political party, Gulshan bua (aunt), as the people of Ayodhya call her, doesn’t want to be called a politician. “Rajniti, kootniti to netaon ka kaam hai. Yeh mere bas ki kahan hai? Main hamesha se sirf ek social worker rahi hoon (Politics is not my cup of tea. It is for politicians. I have always been a social worker),” she says.

Her mission, she says, is to give Ayodhya a facelift that the birthplace of Lord Ram truly deserves. “They call it the land of Ram. Zara Mecca jaiye aur dekhiye woh ek jannat hai zamin par (Just go to Mecca and see how it has been turned into a heaven on earth). Ayodhya and Faizabad stink despite being so important for the majority community of the country. This needs to be corrected,” she asserts, while elaborating on her plans for the temple town to nurture it as a dream destination for ‘Ram Bhakts’.

The Ram temple figures prominently in her plans for Ayodhya. How can one think of Ayodhya without Lord Ram, she asks. Accusing political parties of keeping it alive only for political gains, without finding a solution acceptable to all, Bindu condemns the saffron forces. “How can they be in peace till ‘Ram Lala’ is dwelling in a makeshift structure at his birthplace?” she asks.

“My endeavour will be to bring both communities on negotiating table to reach an amicable solution respecting the religious sentiments of both,” she maintains. While the Mandir can come up at Janmaboomi Sthan, Masjid can be built at an agreed place, she says. “Aisi jagah khojenge jahan na mandir ke ghanton ki goonj aaye aur jahan se azaan ki awaz mandir tak na pahunch paye (Under the compromise formula, temple and mosque will come up at a distance so that neither gets disturbed),” she opines.

She reminds the BJP government in the state and the Centre of their commitment to the people of the country by exhorting them to pave way for the Ram temple.

Beautification of the temple town, rectifying the drainage and transportation systems, improving the condition of roads and cleaning the Saryu river are other top items on her agenda.

“If elected, I will show CM Yogi Adityanath what development stands for,” she asserts. “If PM Modi has no family and Adityanath is a Yogi, I, too, don’t have relatives to look after. Entire Ayodhya is my family now. So I don’t have any lust for wealth.”

Born into a Brahmin family in Sitamarhi, Bihar, Gulshan was taken away by her ‘guru’ when she was just three years old. Thereafter, she spent more than 30 years in Delhi. She has donned the mantle of a ‘guru’ and spends most of her time helping people in distress, arranging mass marriages of poor girls and standing by the needy.

Stay up to date on all the latest The Sunday Standard news with The New Indian Express App. Download now
TAGS
Ayodhya Ram Temple Gulshan Bindu