Earlier in the day, the NGT gave a go-ahead to the Delhi government on odd-even with no exemption for the two-wheelers, women and VIPs.

NEW DELHI: The Arvind Kejriwal Government on Saturday scrapped its plan to implement the Odd-Even car rationing scheme for five days from Monday. The Delhi Government’s decision came hours after the National Green Tribunal (NGT) ordered that there would be no exemptions for Government officials, two-wheelers and women drivers. The Delhi Government plans to appeal to the NGT on Monday to review its order.

However, the green tribunal exempted CNG vehicles, emergency services such as ambulance and fire, and vehicles carrying waste. 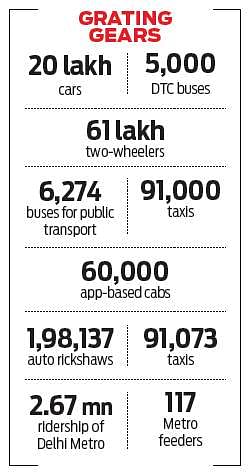 The exemption to motorcycles and scooters was not allowed after the Central Pollution Control Board (CPCB) and the Delhi Pollution Control Committee (DPCC) told the NGT that two-wheelers were more polluting than other vehicles, and emissions from them accounted for 20 per cent of the total vehicular pollution.

The scheme that was to be rolled out from November 13 to 17, had announced exemptions for women drivers, two-wheelers and vehicles carrying children in school uniforms, besides VVIPs.
Under the Odd-Even scheme, private vehicles are allowed to run based on the last number of their licence plates. Odd-numbered four-wheelers are allowed to run on odd dates, while even-numbered vehicles can only run on even dates.

Soon after the NGT’s decision, the Delhi Government called an urgent meeting over the issue and decided to appeal to the NGT on Monday requesting it to review its order.

“In light of the two conditions placed by the NGT on two-wheelers and women, at the moment we are calling it off. We will go back to the NGT on Monday to file a review petition requesting it to reconsider the decision regarding the two,” said Delhi Transport Minister Kailash Gahlot. “If 30 lakh two-wheelers are not allowed to ply, the public transport system in the city will not be able to cope with the pressure. Also safety of women is always a prime concern of this Government and it is paramount,” said Gahlot while addressing the media.

Maliwal said the NGT should review its decision. “It’s so sad. Ultimate losers are all of us. The NGT also ordered that 60 lakh people using two-wheelers won’t be exempted. Did they check the availability of buses and metro coaches before passing the order? Did they consult some women about their safety concerns? It’s an impractical order which shall ensure failure of the Odd-Even scheme.”

During the two-hour hearing, the Bench pulled up the Government and said, “You are getting the tag of the worst Capital in the world. The Supreme Court and NGT have suggested hundred measures to curb pollution, but you always opt only for Odd-Even. Nothing has been done by the Delhi Government in the last one year.”

Taking note of the other measures suggested by the Environment Pollution (Prevention & Control) Authority (EPCA), the tribunal said, “Measures like enhanced parking fee to decrease pollution are absolutely absurd.”

The tribunal asked the EPCA to reconsider the four-fold rise in parking fee. It also questioned the National Highways Authority of India and National Buildings Construction Corporation (India), as to why the Bench shouldn’t impose exemplary cost for violating its order to suspend all construction activity.