There's good news for those who cannot watch the marvellous Mahamastakabhisheka—the Jain religious event held once in 12 years in Shravanabelagola live.

By B R UDAYA KUMAR

SHRAVANABELAGOLA : There's good news for those who cannot watch the marvellous Mahamastakabhisheka—the Jain religious event held once in 12 years in Shravanabelagola live. They can now watch the event live in Virtual Reality (VR) format in the comfort of their homes,  thanks to the district authority for working out the technology.All one needs to do is use VR glasses and headsets connected to a smartphone and scan the given barcode. The plan was mooted by Deputy Commissioner Rohini Sindhuri. The details are still being worked out on how to make it a roaring success. 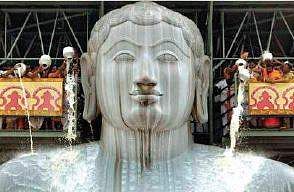 Being a first-of-its-kind in Karnataka, the live streaming of the event in VR format will let people watch the programme at a 360-degree viewing angle using headsets or multi-projected screens fitted with sensors.The district authority is planning to distribute over 10 lakh VR glasses to people. One can watch the programme live from anywhere in the world for a week starting from February 7.

This technology will help devotees avoid climbing Vindhyagiri during the Mahamastakabhisheka. It will also help lessen the rush at the Viewers’ Gallery being constructed to watch the eye-catching event from a close distance. For the very first time, the government is constructing the Viewers’ Gallery with German technology to accommodate nearly 5,000 people. The Deputy Commissioner is reportedly in talks with several multinational companies regarding sponsorship. Sources said some companies are already keen on joining hands with the district authority to sponsor the programme.

A huge turnout of people is expected to witness the Mahamastakabhisheka, but not all will be able to watch it directly. Hence, BSNL officials have been asked to provide hi-speed Internet at Vindhyagiri where the 57-feet monolith statue of Gomateshwara is installed so that people will be able to catch it live on their phones.