Going down the drain: Polluted river Gomti gasps for breath

Environment scientists have confirmed a number of harmful heavy metals in the river, which is the lifeline of Lucknow.

LUCKNOW: While the Ganga is still gasping despite a dedicated ministry for it and the NDA government’s Namami Gange project to clean the holy river, its tributary Gomti has emerged as one of the most polluted rivers in Uttar Pradesh. Environment scientists have confirmed a number of harmful heavy metals in the river, which is the lifeline of the state capital. For the first time, arsenic has also been found in the 13 km stretch passing through Lucknow, setting alarm bells ringing for the city to make concerted efforts to save the river. 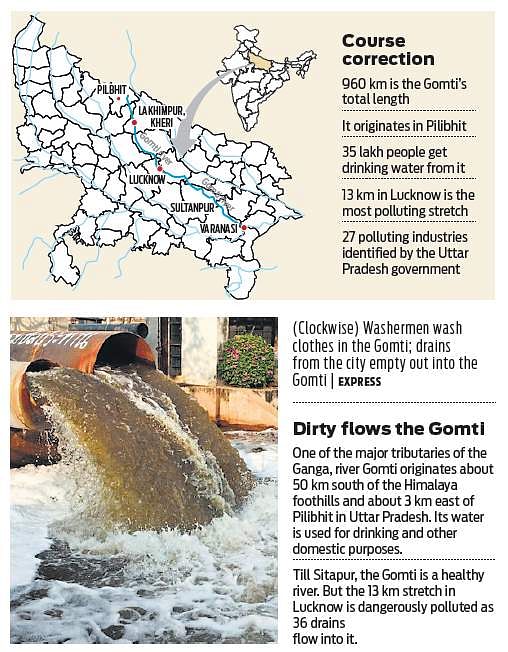 According to a recent study by a team of scientists, it was found that the concentration of heavy metals like lead, cadmium and copper had gone up considerably in the river water. The metals were found in higher concentrations across 10 identified locations in Lucknow. Concentration of metals in the river bed was much higher than in the surface water.

The held by environmentalists and scientists of Baba Saheb Bhim Rao Ambedkar Central University; Department of Environmental Sciences, Jharkhand Central University; Indian Institute of Toxicological Research (IITR), Lucknow, and a few other institutions also focused on the level of accumulation of heavy metals on various aquatic plants, which are thebioindicatorss of the level of contamination.

The results show that concentration of copper was the highest, followed by cadmium and arsenic accumulated on bio indicators. “This is an alarming scenario,” said an IITR scientist.

Heavy metals like cadmium, chromium, cobalt, mercury, manganese, nickel, lead, tin and zinc which have a density over 5, affect the environment adversely even if present in a very small quantity. As per IITR scientists, while the exposure to arsenic through drinking water and food products may lead to cancers and skin lesions, accumulation of cadmium in humans produces toxicity of liver and kidneys.

“Till Sitapur, the Gomti is a healthy river. But the 13 km stretch in Lucknow is dangerously polluted as 36 drains flow into the river. It gets worse when effluents from  sugar mills around the city are also discharged into it,” said Dr Venkatesh Dutta, environmental scientist of B R Ambedkar University, Lucknow.

The immersion of hundreds of Durga and Ganesha idols also results in metallic contamination. Hundreds of idols of Goddess Durga and Lord Ganesha containing biodegradable and non-biodegradable materials were immersed in the river every year during the festive season. However, for the last few years, idols are usually buried in a huge pit along the banks of the Gomti.

“Moreover, the levels of dissolved oxygen, which should be over 4 mg/litre for normal aquatic life, is just above 1 or even zero at some locations across Lucknow, threatening marine life and those who are supplied its water for drinking purpose,” said Dr Dutta.

Stay up to date on all the latest The Sunday Standard news with The New Indian Express App. Download now
TAGS
Uttar Pradesh Gomti Ganga river most polluted river