Roselle is a plant of the species hibiscus and is widely-cultivated in Uganda, the East African country.

TIRUVANANTHAPURAM : Roselle is a plant of the species hibiscus and is widely-cultivated in Uganda, the East African country. Though its rich purple juice is relished by the local people, the possibility of marketing it as a popular beverage had not been explored. That was, until a training programme by Kudumbashree for entrepreneurs in Uganda completely changed the scenario. Thanks to the training, a large number of units producing Roselle juice have started sprouting in the country.

Harikishore S, Kudumbashree executive director said every member who underwent the agriculture-based enterprise development training has set up their own juice production unit with the active participation of women in the neighbourhood. Known in Uganda as ‘malakwang’, Roselle is mixed with sesame or groundnut paste and is used widely in cooking. With research throwing light on Roselle’s ability in treating obesity and high blood pressure, the plant has also gained popularity as a food item. 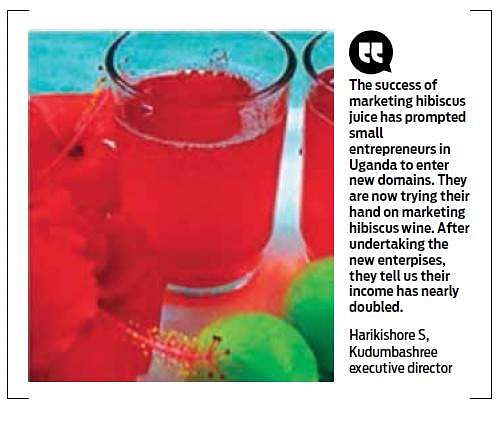 “The success of marketing hibiscus juice has prompted small entrepreneurs in Uganda to enter new domains. They are now trying their hand on marketing hibiscus wine. After undertaking the new enterpises, they tell us their income has nearly doubled,” said Harikishore, who returned from Uganda after overseeing the training programme.

As a continuation of its overseas initiatives, Kudumbashree is now conducting a ten day course for women in Uganda on entrepreneurship development in the agricultural sector. The training programme, being held in the Ugandan capital Kampala, will familiarise local women with the working of neighbourhood groups in Kerala and help in their skill development.

“We hope our present training to 50 members will assist in the formation of similar enterprises. We hope the trainees will act as a nucleus of growth among rural women by setting up small agriculture value chain enterprises,” Harikishore said.