While PM Modi and BJP claim that they brought water to Gujarat, drinking water availability still remains a problem in the state.

NEW DELHI: While Prime Minister Narendra Modi and the BJP claim to have brought water to the parched regions of poll-bound Gujarat, it appears that drinking water availability still remains a problem in the state.

An analysis of data, as on November 1, of funds spent under the MP Local Area Development Scheme (MPLADS) shows that the maximum projects sanctioned by the 26 Lok Sabha members from the state related to drinking water facilities.

Of the total 416 works taken up under MPLADS in the state this year, 229 dealt with drinking water and related activities such as de-silting of pond, piped drinking water supply, hand-pumps, tube wells and water tankers. Road-related works came next, with funds allocated to 155 projects for construction of roads, approach roads, link roads etc..

As Gujarat Chief Minister, Modi had pushed for the expansion of the Sardar Sarovar Project (SSP), which stores the Narmada waters in various dams to allow parched areas of the state access to drinking waters and irrigation facilities. After a long-drawn judicial battle, the state government was allowed to raise the height of the main dam of SSP a few months ago. The helped increase the storage capacity of the dam 3.75 times to 4.73 million acre-feet.

Saurashtra and Kutch, which account for about 56 per cent area of the state, shared just 20 per cent of water resources. Now, the government claims that 20 lakh hectares of agricultural land would have access to irrigation facilities, besides drinking water.

While the Gujarat MPs clearly accord priority to drinking water availability, analysis of the MPLADS data for the country shows MPs’ preference for works related to railways, bridges and pathways. Together, these accounted for 10,711 of the total 26,972 projects sanctioned.

Out of the total entitlement of Rs 520 crore, the districts’ administration have sanctioned projects worth Rs 409.54 crore, while expenditure on the ground has so far been Rs 307.17 crore. The average utilisation percentage for the country is 78.66 per cent. 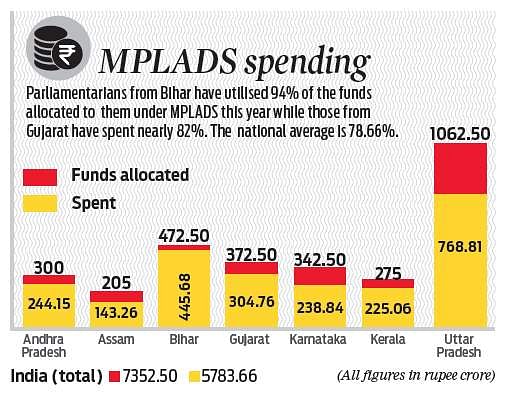