NEW DELHI: The Railways is working on an ambitious project — a Golden Quadrilateral interconnecting all four major metros, including Delhi, Mumbai, Chennai and Kolkata, with high-speed network of trains running at 160 kmph.

Minister of Railways Piyush Goyal has asked the Railway Board to prepare a blueprint of the four arms and two diagonals of the Golden Quadrilateral and submit a detailed report with cost estimates by December 31. The ministry hopes to get the project passed in the next Budget.

The project will cut down travel time between the four cities that have the heaviest rail traffic. At present, trains run on a maximum speed of 85-90 kmph against the maximum sanctioned speed of 130 kmph.
Finance Minister Arun Jaitley had announced two of the six arms — Delhi-Mumbai and Delhi-Howrah — in the 2017-18 Budget allocating around `18,000 crore. The Railway Board was working to prepare a blueprint for the Howrah-Chennai and Mumbai-Howrah sections to be included in the Budget.

However, Goyal, during a meeting last week, directed the officials to prepare a report that will cover all arms of the quadrilateral. The first meeting for preparing the draft was held in Chennai this week and was attended by officials from all zonal railways.

According to rough estimates, an extra budgetary allocation of around `36,000 crore will be required for the project. The plan is to launch the high-speed train network by August 15, 2022, which will coincide with India’s 75th Independence anniversary.

Once commissioned, these sectors will match the speed of country’s fastest train, Gatimaan Express, which runs between Delhi and Agra at 160 kmph.

“We have been asked to complete the feasibility report in two months, which otherwise would have needed eight to ten months. Everyone has been working overtime to prepare the report and submit it in time so that it can be included in the Budget,” said a source in the railway ministry. 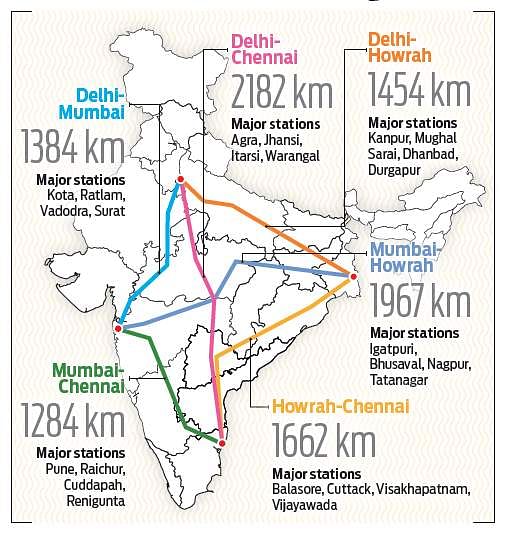