Yolk of the matter: there could be pesticides in your egg

Most doctors advise parents to add eggs to their children’s diet to make them healthy. But imagine the shells of the eggs having residues of harmful chemicals like DDT and BHC, and also a potentially fatal bacterium called salmonella.

NEW DELHI: Most doctors advise parents to add eggs to their children’s diet to make them healthy. But imagine the shells of the eggs having residues of harmful chemicals like DDT and BHC, and also a potentially fatal bacterium called salmonella.

In a survey in poultry farms across India, leading Pune-based NGO Animal Equality found residues of DDT and BHC in egg shells. DDT is mainly used as an insecticide, and its use in agriculture is banned in India due to its harmful effects.

“We were shocked to find chemicals like DDT and BHC in eggs. Unhygienic conditions and non-compliance with standard operating procedures in poultry farms are the major reasons for DDT and BHC being found in eggs,” a volunteer working for the NGO said.

DDT and BHC enter the human food chain through contaminated meat and associated products. Extensive exposure to DDT can cause cancers and other diseases.

“Residues may occur when the feed given to laying hens is contaminated, either at the source or during mixing,” Ajith, a veterinary doctor in a government hospital, said, adding that it may take weeks of treatment to make the eggs residue-free.

Another contaminant found in eggs is the deadly bacterium salmonella, which causes food poisoning called salmonellosis. “Symptoms of DDT poisoning, such as headaches and cancer symptoms, take time to appear in humans as only minuscule amounts of the chemical get into the egg, and it takes a lot of biomagnification for the harmful effects to be seen. However, salmonella can easily go inside the egg as it can survive in the fluid,” Ajith said.

When an egg is laid, the difference in temperatures inside the hen’s body and outside helps salmonella make its way into the egg. The risk of salmonella poisoning increases if the eggs are laid in unhygienic conditions. Symptoms like nausea, headache and dizziness are seen very quickly as the human body provides the right temperature for salmonella propagation,” said Dr Prakash Rao, a general physician in Hyderabad.

Poultry farm owners say they are forced to use DDT to prevent the spread of diseases among their fowl as it is cheaper than other insecticides. “We try our best not to contaminate the hens and eggs. Why would we do things which cause us losses?” said a poultry farm owner in Solapur, Maharashtra. 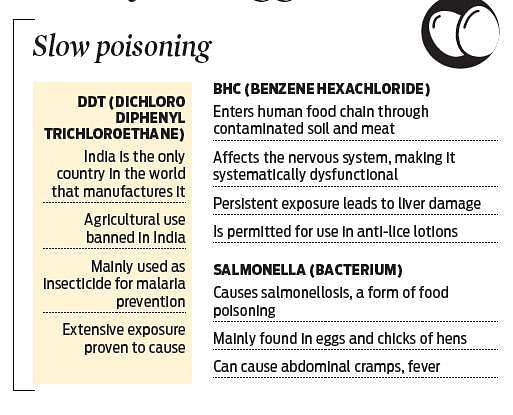