NEW DELHI: Babus can make or break the NDA government’s chances of returning to Raisina Hills in 2019. Prime Minister Narendra Modi knows it too well. His silent operation in the Union ministries in the last few days is aimed at invigorating the bureaucracy.

The government has admitted that there is a disconnect between officers and people they are supposed to serve. In a communication this week, it said the lower bureaucracy, born out of Central Secretariat Services and considered as the backbone of governance, has completely lost the field focus and they must spend at least five-six days every month in the hinterlands to understand the ground reality before drafting people-centric policies.

This is just one among over 35 measures that the government has planned to foster growth, reduce the nation’s stubbornly high unemployment rate and revolutionise the central programmes before it faces the electoral battle in another 16 months. Besides, Prime Minister Narendra Modi has given a 19-point observation to put the entire system back on track. Modi had promised maximum governance following the BJP’s landslide victory in 2014.

■  Bureaucrats have lost field focus; must spend 5-6 days in a month in the field.
■  Move from process-based administration to performance-based administration.
■  Each officer to be given a clear task with freedom.
■  Evolve a system where quality is given weightage and not just rules.

Several flagship schemes are stuck and over 300 infrastructure projects are facing colossal delays. Sources said PM Narendra Modi is chairing regular meetings with the officers to diagnose and treat the disease that has gone into the very bone marrow of the system. A direction has also been issued to hold regular internal discussions in each ministry on the basis of treatments advised by the Prime Minister’s Office (PMO) and Cabinet Secretariat.

The latest meeting, which was held on October 5, provided further polished action points to surgically remove the problems plaguing the bureaucracy. “Need to move from process-based administration to performance-based administration. Each officer to be given clear task with freedom and responsibility. Central Secretariat has lost field focus. Officers may be mandated to spent at least 5-6 days in a month in the field with a single target,” the notes accessed by The Sunday Standard revealed.

According to the documents, Modi has told the babus that each file they are handling is not just mere piece of paper but many lives are dependent on it and they need to foresee the impact before taking a decision.

“Behind every file are people. Whatever you do or not do, impacts the entire country. You need to be aware of this always,” the PM was quoted as saying during the latest meeting with the bureaucrats. The proposed measures would also focus on reform in procurement and introduction of a flexible system.
“Treasury is a den of corruption in many states. Can we dispense with Treasury system and move to core banking, like in the Central Government? Identify critical projects, which Heads of Missions abroad can market to potential investors and ensure clearances for these projects, apriori,” the document said.

Ravi Mittal, Additional Secretary in the Department of Financial Services, has been asked to prepare a concept paper on Treasury system in states before a decision could be taken at the central level. Before the 2019 elections, the measures taken to reform the bureaucracy are ultimately aimed to develop 100 districts across the country on a mission mode. Another important measure is to do away with hiring of consultants in the ministries. The PM’s biggest challenge is to create more jobs. He is eyeing on electronic manufacturing potential that could be diversified for health equipment and medical devices, and not just limited to mobile phones.
“Focus on 100 lowest faring districts—on a mission mode,” Modi has directed the officers. 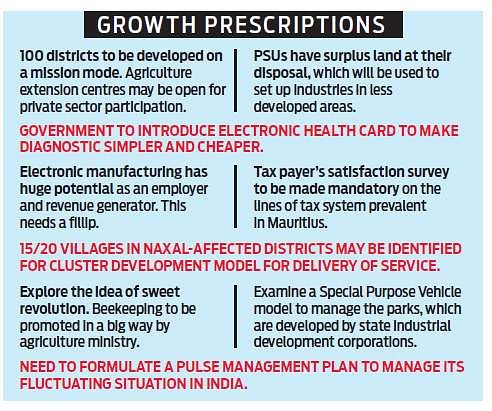 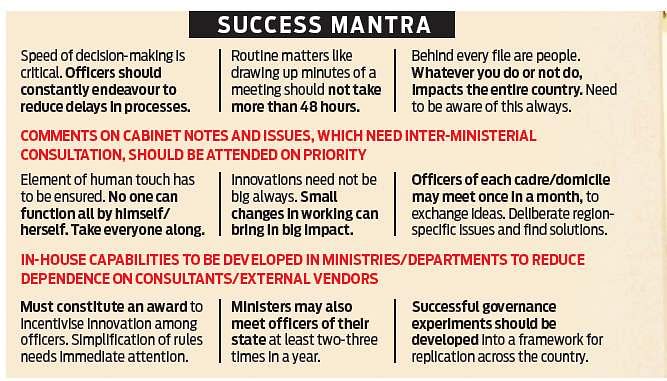