Sachchi Baat: Prabhu Chawla in conversation with UP CM

“Those who think only of gaining power and personal development have been taught a lesson by the people. They were so power drunk they left all thought of development behind.”

What difference do you see between running a muth, a temple and a state as huge as Uttar Pradesh?
I had to redefine Sanyas. Sanyas is not escapism. The responsibilities entrusted to us should be fulfilled as devotion, as penance. Development of UP can play a major role in the nation’s growth. Despite dedicated efforts for growth and development of the nation, if results have not been as per the expectations, it is because the state has been backward to some extent. Now I have  got an opportunity to work for it, and I think we will be able to make that difference.

How do you handle power-hungry (bhogi) elements in politics?
A. I hardly get time to sit with such elements. From 7 in the morning till late night, well past midnight, I am busy with state programmes. I think where there is a yogi, bhogis can’t have a presence. Yog ke tej ke saamne,  bhog ka koi astitva nahi hota hai (Where there is yog, there is no place for bhog). So power hungry elements don’t stand a chance anymore. 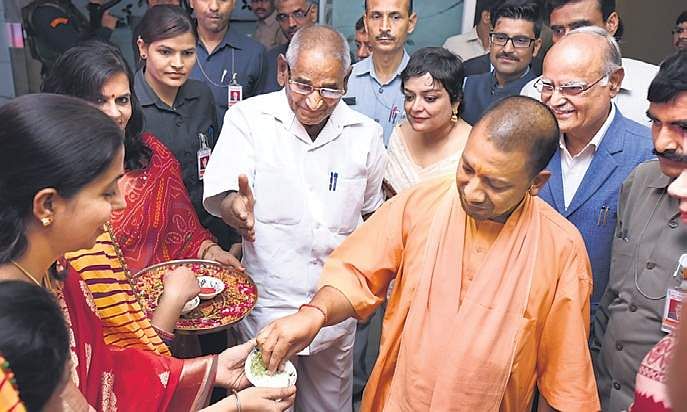 How successful have you been in your crusade against inefficiency and corruption during the five months of your governance?
UP has lost a lot in the last 15 years. After independence, the state used to top the index of per capita income. Today, the state has been pushed to the lowest rung of development. UP used to be the giver, today it stands as a beggar. Political leadership is responsible for such a pity state of affairs.  Fifteen years of governance is a long period. The administration has lost the capability of decision making. So it is imperative to make it capable and result-oriented.

Name five challenges that you faced in the last five months?
We got the state coffers empty. The biggest challenge was how to pay salaries to our employees. By God’s grace and the system’s cooperation, we started making headway. We made provision for a `36,000-crore farmers’ loan waiver. We made a record purchase of farmers’ produce and credited the money to their accounts directly. We made houses available to 9.70 lakh people in rural areas and over one lakh people in urban areas. We are also giving `2.50 lakh to the deprived under the Pradhan Mantri Garib Awas Yojna. This has been the speed of work. We will also increase the limit of state budget to `10 lakh steadily in the coming years.

We plan to arrange money from available resources. For this, we have adopted austerity measures and stopped all extravagance. Schemes that were formulated keeping individuals in mind and with no benefit for the common man have been shelved. This has helped us in arranging money for loan waivers and salaries and to initiate development schemes. 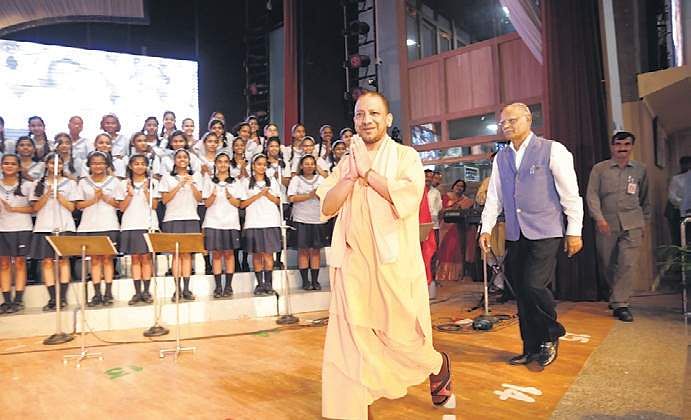 The state’s law and order was another challenge before me. In the first month of taking over, we brought law and order totally under control. But as we started curbing illegal mining, illegal slaughtering, encroachment of land by politically patronised land mafia, the crime graph suddenly soared as the anti-social elements channelised their money to increase the crime in the state. I was rather surprised. I directed the officers concerned to lodge cent per cent FIRs and take action accordingly against all criminals and antisocial elements. This showed results and the crime graph has begun going down for the last one month.

Do you think that rise in crime in the name of cow protection is politically motivated or the handiwork of fringe elements who are trying to give UP a bad name?
Not a single incident of this kind has taken place in UP. No one was attacked in the name of cow protection here because we had stopped cow smuggling and illegal slaughtering in advance.
Do you have special schemes or plans for the uplift of Purvanchal and Bundelkhand, the two backward regions of UP?

We are going with development of the entire state without any discrimination, irrespective of political relevance of the particular region or district. Take the case of power distribution. We are trying to streamline the power scenario step by step in order to bring uniformity. In Purvanchal, we are working to develop the region in terms of infrastructure by initiating new schemes, bringing sugar mills and other industries. As far as the health scenario is concerned, the way the children’s deaths due to encephalitis is being portrayed is really unfortunate. Those who have been at the helm all this time should introspect before pointing a finger at us. It’s a 40-year-old problem. The disease has affected 17 states and 170 districts. I want to ask those who are criticising our government: what did you do to address this menace. Death should be condoled and victims empathised with rather than the issue politicised. Previous regimes did nothing for the development of this region. They do not have a moral right to question us.

With you as CM, why is industrial investment not coming to UP?
It is because the old thinking was flawed, but we are changing it. UP is the biggest market in the country. It has numerous possibilities. But the rule of law is the first condition; second is to establish an industry-friendly atmosphere that is free from red tapism. I am happy that we are treading in a positive direction. The future is bright and the interest shown by the investors is encouraging. The result will soon come out for everybody to see. We have also come out with a new industrial policy with the provision of a single-window system. Accountability will now be set. Officers will not be allowed to hold a file for more than three days. Even then if they don’t mend ways, they will be given voluntary retirement. They will have to perform or perish.

Is there any fear among people triggered by your aggressive Hindutva agenda?
There has not been a single riot during the last five months. It will not be there in future as well. I may be associated with BJP but, as the chief minister of UP, I am answerable to the 22 crore people of the state. I am supposed to take care of the security and pride of the people and I will do that. Taking them towards self-reliance is my moral duty.

Do you think the Ram temple will be constructed in your regime?
If Lord Ram wishes it, the temple will be built. The indications are good and positive.

Do you think that political bitterness is rising in the country? Neither the ruling nor the opposition leaders sit down to discuss any issue.
I talk to everyone. I have invited everyone to join me in the state’s development. I talk to Akhileshji, Mayawatiji and I also call up Mulayam Singhji often. But since they have no interest in working for the state’s development, they are incapable of making any useful suggestions. They all became drunk on power and moved ahead, leaving all thoughts of the people’s development behind them.
But now, the people of the state have given their mandate against such politicians. Those who think only of gaining power and their personal development have been taught a lesson.
I still try to strike a dialogue with them. I invited everyone for the inauguration of the Metro service in Lucknow. But nobody turned up. In the coming days, wait and watch;  they will be seen roaming alone devoid of all support. They will have to own up to the mismanagement of the state and they should also apologise for this state of affairs.

I am not bothered by power-hungry
elements in politics. From 7 am to well  past midnight, I am busy with the state’s programmes. In any case, where there is a yogi, ‘bhogis’ can’t have a presence.

I am not bothered by power-hungry
elements in politics. From 7 am to well  past midnight, I am busy with the state’s programmes. In any case, where there is a yogi, ‘bhogis’ can’t have a presence.

UP used to top the index of per capita income. Today, the state has been pushed to the lowest rung of development. This state used to be the giver, today it stands as a beggar. Poor political leadership is to blame for the pitiable state of affairs.

The way the children’s deaths due to encephalitis is being portrayed is really unfortunate. Those who used to be at the helm all this time should introspect before pointing a finger at us. It’s a 40-year-old problem. What did they do about it?

If Lord Ram wishes it, the temple in his name will be built during my regime.
The indications that I see are good and positive.

Now we are on Telegram too. Follow us for updates
TAGS
Prabhu Chawla UP CM Yogi Adityanath women achievers devi awards