What is common between Ashim Khurana, Chairman of the Staff Selection Commission, and Anita Karwal, Chairperson of the Central Board of Secondary Education? Firstly, both are under fire

NEW DELHI: What is common between Ashim Khurana, Chairman of the Staff Selection Commission, and Anita Karwal, Chairperson of the Central Board of Secondary Education? Firstly, both are under fire for the leakage of question papers — Khurana for the SSC entrance examination and Karwal for the Class X and XII Board exams. Secondly, both are Gujarat cadre Indian Administrative Service (IAS) officers.
Khurana and Karwal are not the only Gujarat cadre IAS officers helming Central government ministries, departments and organisations. There are a host of other bureaucrats in top positions on Raisina Hill and elsewhere. 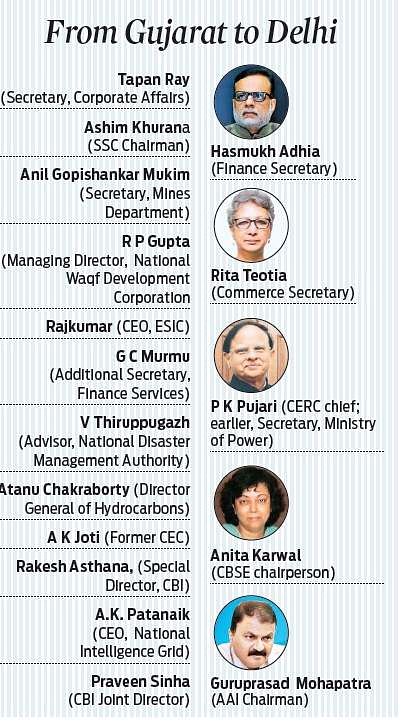 Ray, a 1982 batch IAS officer, was given additional charge as Secretary, Department of Economic Affairs, when the position fell vacant after the retirement of Shaktikanta Das in May 2107.Sources said most of the IAS officers moved to the Centre after May 2014, when the National Democratic Alliance (NDA) stormed to power with a huge majority.Dilip Cherian, image guru who keeps a close eye on the bureaucracy, said under Prime Minister Narendra Modi, Gujarat cadre IAS officers have had a glorious run.

“Some would even say that they have come to wield disproportionate power over other state cadre officers due to their association with Modi when he was the Chief Minister of Gujarat. Modi is known to have a soft spot for babus from his state,” Cherian added. The all-important Prime Minister’s Office is filled with hand-picked officers from Gujarat. Arvind Kumar Sharma is a Joint Secretary, Rajiv Topno is Modi’s private secretary, and Sanjay Bhavsar and Hiren Joshi are Officers on Special Duty in the PMO.

The most senior of them is PK Mishra, who is known as eyes and ears of the PM. Mishra, a 1972 batch Gujarat cadre officer, is Additional Principal Secretary in the PMO looking after the Appointments Committee of the Cabinet. Many consider him the most powerful bureaucrat in Delhi. He served as the Principal Secretary to Modi between 2001 and 2004. Even IPS officers from Gujarat have cornered plum posts. Controversial police officer Rakesh Asthana was made Special Director in the CBI last year while AK Pattanaik is the CEO of the National Intelligence Grid (NATGRID).

Stay up to date on all the latest The Sunday Standard news with The New Indian Express App. Download now
(Get the news that matters from New Indian Express on WhatsApp. Click this link and hit 'Click to Subscribe'. Follow the instructions after that.)
TAGS
IAS SSC