Ideas take root in an ecosystem of awareness

NEW DELHI:  The tall, green trees with thick trunks holding slender branches, aren’t just ornaments aligning the darb road. They are also life forces of the ecosystem that lets humans exist. If put down to statistics, it’s said that in one year an acre of mature trees can provide oxygen for 18 people, but sadly, it’s also something that we’ve most taken for granted. The quest for sustainable development seems like a non-priority. Why else would we allow the brutal deterioration of earth’s resources in a desperate attempt for mindless consumption? As the debate over the subject ensues, we talk to Juhi Saklani, who speaks of sustainability through photography, as part of India Habitat Centre’s second edition of a year-long photo fest called Habitat Photosphere.

Saklani’s photographs will be sculptural trees and roots that grow out of old walls and buildings, out of other trees, or unexpected spaces. The idea is to emphasise the synergy and interconnectedness of life.
Even though the photographer considers herself lucky enough to spend many years of her childhood among old trees in Dehradun, a jolt of loss made itself evident when a local river called Rispana, near her house, dried away. “When I was a child, around 1970, the river flooded so much that the road near our house was destroyed. When I passed out of school in the late 80s, the river seized to exist,” she recalls.

All photos by Saklani will come with nuggets of information highlighting her thought process. In fact, she says, she would like to have an outreach corner in which children/adults can interpret the theme and she could print and put up their photographs. “My desire is to make my fellow citizens ‘tree-conscious’. I’d rather not take on a heavy mantle of improving anyone’s minds — let me just do this because I would love to share with more people, the joy and solace which I get from trees,” she says.

Sustainability spells responsibility and calls for judicious practices but development isn’t its best friend. However, the photographer doesn’t really look at it as a debate. The deeper question is, she argues, is how we define development? “Development is happening with the most tragically misplaced priorities, especially the political need to look for big answers in grand projects. Every time you make roads broader, vehicles quickly increase to take up that space. Delhi is planning to cut a huge part of its lungs, the green ridge near Dhaula Kuan, to expand the road to the airport,” she says with worry. 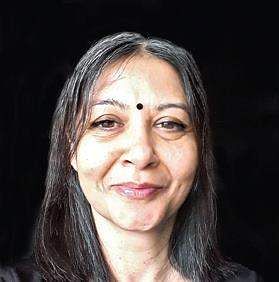 Once you cut forests, have mined the earth, built dams and all-weather roads in unsuitable areas, what you get is distress migration, whole communities without water, tragic landslides. “It’s hard to enumerate the interwoven mess that results,” says Saklani. Over the decades, she’s seen two contrasting developments. One, the word environment being used responsibly and dutifully, wherein people are conscious of not using plastic, or wasting water etc. and on the other hand, the government creating ‘smart’ enclaves by cutting down trees. “For long, nature has been seen as something outside of us, to be used for our benefit. But in my work, trees express themselves through old buildings, masonry, vertical surfaces, abandoned vehicles, through platforms that were to contain them, shrines that were built around them, or walls from where they provide hospitality to birds and humans, she says”

Saklani is one of the four awardees of the fellowship. Others including Thulasi Kakkat who talks of the eco-cultural significance of Theyyam ritualistic form of worship from Kerala. Zishaan Akhbar Latif channelises his thoughts around the withering away of river Majuli in Assam, and Syed Adnan Ahmed immerses himself in the subject of rooster combat. They’ve been given `2 lakh grant to produce this body of work that will be exhibited in February-March 2019.

Stay up to date on all the latest The Sunday Standard news with The New Indian Express App. Download now
(Get the news that matters from New Indian Express on WhatsApp. Click this link and hit 'Click to Subscribe'. Follow the instructions after that.)
TAGS
environment deforestation forest