Ahead of the 2019 national polls, the Congress has planned to counter the BJP’s claim that it is now a key player in 20 states.

NEW DELHI: Ahead of the 2019 national polls, the Congress has planned to counter the BJP’s claim that it is now a key player in 20 states. “The Prime M says the BJP is in power in 20 states, but it is in majority only in 10 states. The rest is an exercise in manipulation and atmospherics,” said a Congress strategist and asserted that “claims of a saffron India are white lies”.

“Out of 4,139 MLAs in various states, the BJP has only 1,516. It means that majority lawmakers in Assemblies belong to the non-BJP camp,” he said. “The BJP’s perception of invincibility is one that has been carefully manufactured as a part of its hydra-headed psych-ops. The reality is something else,” said a senior AICC functionary.

According to Congress insiders, the BJP depends on its allies to remain in power in Maharashtra, Assam, Bihar, Jharkhand, Goa, Jammu and Kashmir, Manipur, Meghalaya and Nagaland; and is a lightweight in Kerala, West Bengal, Andhra Pradesh, Telangana, Odisha, Tamil Nadu, Sikkim, Puducherry and Delhi.

“The false projection perhaps lends PM a sense of vindication for his four years of rule at the Centre, which has otherwise been very lacklustre,” said the AICC functionary.

Sources said the number-crunching done by Congress strategists would be used to expose the BJP and would be useful when the Congress sets out to work out poll pacts with like-minded parties for the next Lok Sabha elections. For instance, the recent success in forging a post-poll alliance with the JD-S in Karnataka will be extended to the Lok Sabha elections. Similar pacts are likely with the NCP in Maharashtra, the RJD in Bihar, the NC in Jammu and Kashmir, with the SP, the BSP and RLD in Uttar Pradesh and with the DMK in Tamil Nadu, the sources said.

According to insiders, the Congress, with its unconditional support to Chief Minister HD Kumaraswamy in Karnataka, has proved it was willing to give up temporary, smaller concerns looking at the larger picture. In contrast, the BJP’s allies like the Shiv Sena, the JD-U and the LJP have been uneasy with party, the sources said. 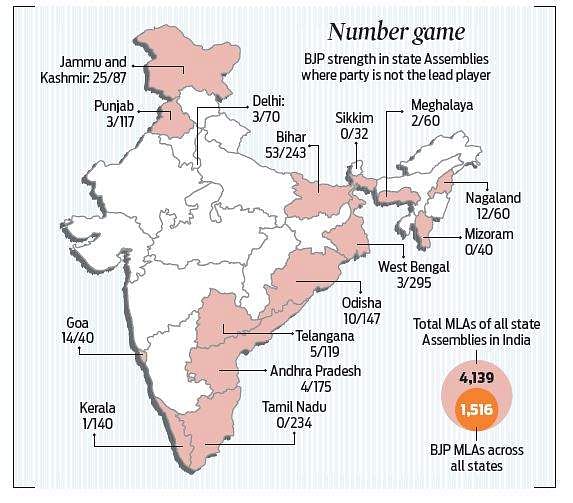 Now we are on Telegram too. Follow us for updates
TAGS
Congress BJP