From dowry harassment and domestic abuse to sexual violence, rising crimes against women have been a cause of concern for society and government.

NEW DELHI: From dowry harassment and domestic abuse to sexual violence, rising crimes against women has been a cause of concern for society and government. But, very few women apparently take legal recourse for redress.

Merely 10 per cent cases pending in the subordinate courts across India have been filed by women, as per the National Judicial Data Grid.

In Delhi, however, the percentage of criminal cases filed by women litigants is higher than the percentage of civil cases.  “The data depicts that the kind of equality we are aiming for women is only visible on papers and not in practical lives,” said advocate Rekha Agarwal.

But, in some states, less than 5 per cent of the pending cases have been filed by women. Even states like Delhi and Gujarat do not witness much litigation initiated by women.  In every state, the proportion of criminal cases filed by women is lower than the overall proportion of criminal cases in subordinate courts.
“I think a major reason for this is criminal cases are filed in the name of the state and our society still believes when it comes to courts and banks, women shouldn’t take the lead,” said advocate Vani Sharma. 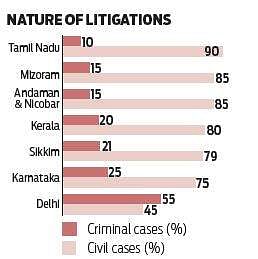 Now we are on Telegram too. Follow us for updates
TAGS
dowry harassment domestic abuse sexual violence