Study reveals that small hydropower projects have significantly affected river flows and water quality; the fish population is under threat too

BENGALURU: Good things don’t always come in small packages. New research studies have revealed that small hydropower projects (SHPs) have significantly affected river flows and water quality in Western Ghats region. They have not even spared fish communities, which have suffered huge ecological impact due to these projects. The first ever scientific study of SHPs (which generate less than 25 MW power) in India has revealed that despite being promoted as cleaner and greener alternative, they have significant ecological impacts and cause alterations in stream geometry, water quality and freshwater fish communities.

The research was conducted by scientists from Wildlife Conservation Society — India (WCS-India) Program, National Centre for Biological Sciences, Bengaluru, Ashoka Trust for Research in Ecology and the Environment and Foundation for Ecological Research Advocacy and Learning (FERAL). The research paper was published in the journal Aquatic Conservation.

The study was conducted in the upper reaches of River Nethravathi (part of Western Ghats biodiversity hotspot) from February to May 2014.  It was found that SHPs affected the river flow by reducing flow immediately below the dam and caused flow fluctuation when water is released back into the river after power generation — both of which have consequences on fish assemblages. The dammed streams had altered fish composition and reduced number of species.

Explaining the results, Suman Jumani, the lead researcher/author says, “Our study was one of the first to holistically assess the impacts of SHPs in the forested regions of Western Ghats. Since they divert water for long distances, it leaves vast stretches of the river almost completely devoid of water flow in the dry season. Waters in these stretches had lower oxygen levels and higher water temperature.”

As part of the study, researchers also held a survey to understand the perceptions of local communities towards SHPs. There was general discontent among communities who were dependent on the river. SHPs have also brought along a new problem: a surge in human-elephant conflicts.

Shishir Rao of WCS-India, who co-authored both the papers, says, “Our research has shown that the sudden onset of HEC in the study area correlated with the beginning of SHP construction. In 2005, the number of claims filed for conflict compensation increased by 173 per cent compared to the year before. Thereafter, the number of claims has peaked every time a new SHP was commissioned. This is a concern since the reserve forests of Sakleshpur are a critical elephant corridor connecting Pushpagiri wildlife sanctuary in the south and Kudremukh national park in the north.”

Multiple SHPs set up in close proximity on the same river have affected both the water quality and the habitat. For example, 10 SHPs currently exist on the 108-km long west-flowing Netravathi River and an additional 44 SHPs have been proposed on the same stretch which could have a deleterious impact on the ecosystem.

“Given that this region is an important watershed and part of Western Ghats biodiversity hotspot, there is an urgent need to monitor, regulate and carefully evaluate the impacts of large-scale infrastructure development,” adds Shishir.

Suman adds, “Despite mounting evidence, the Ministry of New and Renewable Energy has plans to build about 6500 additional SHPs without any environmental and social regulations. With most located within Western Ghats and the Himalayas, it is imperative that the policy concerning these projects be revised to include mandatory minimum flow requirements and individual and cumulative environmental impact assessments.” 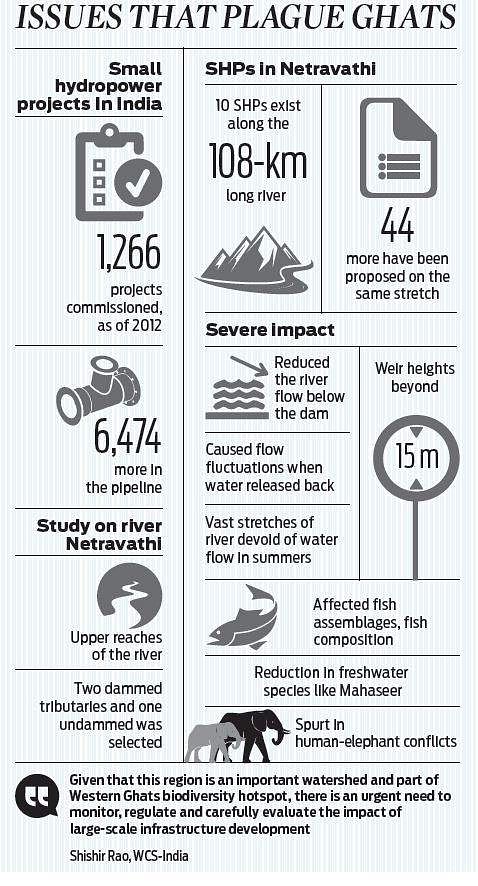