Private airline operators are scrambling to expand their fleets in the coming years to cash in on India’s growing aviation market.

NEW DELHI: Private airline operators are scrambling to expand their fleets in the coming years to cash in on India’s growing aviation market. It is estimated that the number of aircraft will rise by about 150 per cent in next five to seven years. 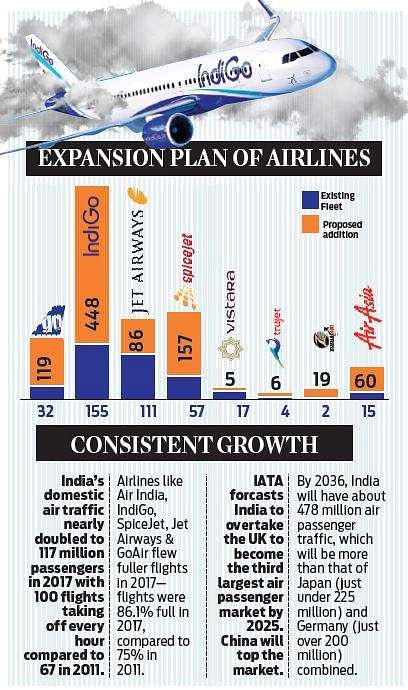 According to sources in the Ministry of Civil Aviation, many private airlines are prepared for expansion and others such as Jet Airways, SpiceJet, IndiGo and AirAsia India plan to add new jets to their fleets. While India now boasts of about 600 aircraft, officials say the private operators will add about 900 aircraft in next five to seven years.

The tentative expansion plan of Go Airlines (GoAir) and Interglobe Aviation (Indigo) is to add 119 and 448 aircraft in next seven to eight years. The fleet strength stands at 32 and 155 aircraft, respectively.
Similarly, air operators such as SpiceJet, Jet Airways and Vistara plan to expand their business by adding more aircraft. SpiceJet planned to add 107 Boeing 737-800 and 50 Bombardiers to its existing fleet of 57 aircraft by 2018-23. Jet Airways will add 86 planes as against the existing strength of 111 aircraft.

Recently, Union Minister of State for Civil Aviation Jayant Sinha  said the Indian aviation sector — currently growing at nearly 28 per cent — will see an investment of close to `1 lakh crore in next five years for capacity augmentation and development of greenfield airports. He pointed out that India's aviation market would surpass the US and China by crossing a billion passenger trips per year in next 10 to 15 years.

Given the expansion plan, aircraft manufacturers companies also see a lot of potential in the Indian aviation market. It will result in India becoming one of the most targeted sales markets for jet manufacturers Airbus and Boeing.

Airbus, which has the largest footprint in India, predicts India’s domestic traffic is set to grow five-and-half times over the next 20 years, making it the world’s fastest expanding major aviation market.
An Airbus spokesperson says the company expects India to order more than 1,320 single aisle and nearly 430 wide-body aircraft in next 20 years.

“Our order book for India will see us deliver on average an aircraft every week for the next 10 years; more than 45 Indian companies are part of our global supply chain; and Airbus will soon scale up its contribution to skilling with its first fully-owned training centre in Asia for pilots and maintenance engineers.”

However, the aircraft manufacturer notes India needs substantial investment in infrastructure and skill development to sustain these levels of growth. It adds that initiatives such as UDAN can accelerate aviation services and contribute to India’s overall economic growth because air connectivity is a force-multiplier for investments and jobs.

Recently, Civil aviation minister Suresh Prabhu visited the Airbus facility in France. Prabhu said if Airbus decides to make aeroplanes in India, it will lead to job creation and make it a win-win situation for both countries.

Officials in the ministry say the government has taken many initiatives to enhance the ease of doing business. The DGCA has revised the Civil Aviation Requirement (CAR) Section 3, Series F, Part I regarding requirements for issue of non-scheduled flight clearances for Indian registered aircraft.
After the revised regulations came into effect in December 2017, Indian aircraft operators with permits to undertake international operations do not require prior permission from the Directorate General of Civil Aviation to undertake international non-scheduled flights from or to airports with Customs and Immigration facilities.