Prem Chand and his wife had opened a small restaurant along National Highway 24 six years ago after taking the space on rent from a landlord.

NEW DELHI: Union Road Transport Minister Nitin Gadkari’s target for completion of the Delhi-Meerut Expressway by March 2019 appears to be too ambitious a deadline for the National Highway Authority of India (NHAI) to meet.

From the quantum of work that remains to be done and the pace at which construction in the second phase is proceeding, it appears unlikely that the expressway would be completed by March next year.
The length of the second phase of the expressway—from UP Gate to Dasna—is more than double of the first phase, which took about 18 months to complete and was inaugurated by Prime Minister Narendra Modi on May 27. 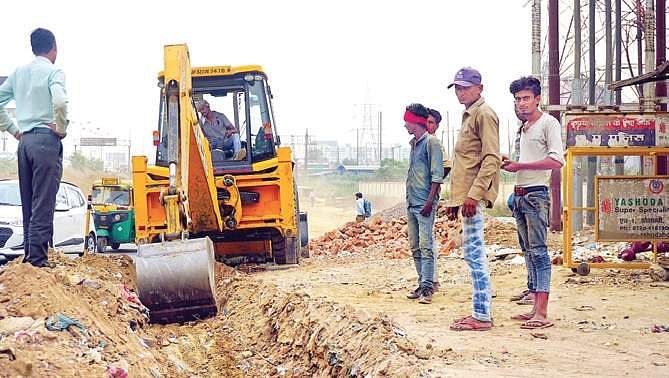 There is also discrepancy regarding the deadline between the company that is developing the project and the government. Two companies, Apco Infratech and Chetak Enterprises, are constructing the 19.28-km UP Gate-Dasna stretch of the 14-lane expressway. While Gadkari and NHAI say the project would be completed by March next year, the companies carrying out the work claim the deadline to be December 2019.

“This stretch of the Delhi-Meerut Expressway is different from the one in Delhi. Here we are dealing with high-tension wire lines passing through highly congested areas. The project deadline is December 2019, which is on track,” Gaurav Upadhyay of Apko (administration) told The Sunday Standard.

Apco-Chetak, which is widening the NH at the cost of around Rs 1,998 crore, stated that 30 per cent of the work has been completed so far. Among the worries the companies have is that the area has many high-tension transmission lines located in congested areas which need to be shifted.

Also, unlike the Delhi section of the Expressway, this stretch passes through some densely populated areas where small markets have cropped up. People who are staying, or running their business, along the stretch, are upset that their lives have been disturbed.

Prem Chand and his wife had opened a small restaurant along National Highway 24 six years ago after taking the space on rent from a landlord. His business was doing well as many commuters on the highway use to stop for refreshments. Now that the expressway is coming up on the route, the couple doubts their family’s future.

NHAI authorities, however, see no obstacle in the way of completion of the expressway in time. “We are running well ahead of schedule. I am sure there will be some problems in the way, but we are more than capable of handling them and not letting the project to be delayed. All the assumptions that our project will not be completed before the set deadline of March 2019 are baseless. We are on track and we will complete the expressway before the deadline,” a senior NHAI official said.

Now we are on Telegram too. Follow us for updates
TAGS
snail’s pace Expressway