When the Punjab government started pre-primary classes in government schools on Children’s Day last year, it became the first state in the country to do so.

CHANDIGARH: When the Punjab government started pre-primary classes in government schools on Children’s Day last year, it became the first state in the country to do so. But so impressed is the Union Government with the initiative that it has told other states also to adopt the model.

The Centre has even decided to provide funds to the states to include pre-primary sections in government schools. It has given Rs 28.03 crore to the Punjab government for this initiative in 2018-19.
Under this initiative, named ‘Khed Mehal’, children are encouraged to join government schools at age of three years in pre-primary classes and no fee is charged. About 1.6 lakh children between the ages of 3 and 6 years have been enrolled in all 12,955 primary schools in the state. 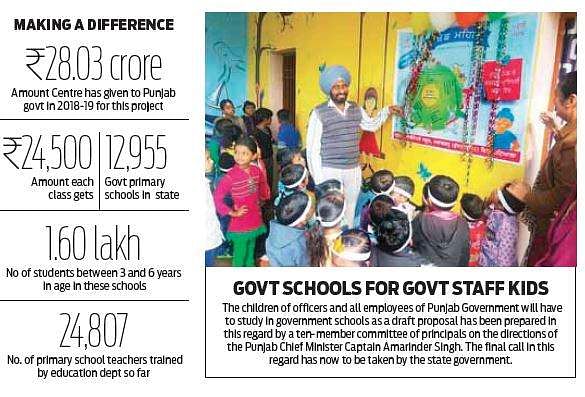 The pre-primary classes are of three-hour duration. “Play stations have been created in class rooms, with walls painted in different colours. Toys and other child-friendly stuff, including see-saws, are kept for the children so that they feel at home. Teachers teach alphabets, words, numbers etc. to the tiny tots while playing. They also narrate stories to the kids for which 20 story books have been published. Worksheets and stationary are given to the children but they do not have to bring any books or bags,” said an education department official.

The department has trained 24,807 primary school teachers and further trainings are going on. Maninder Kaur, head teacher of government elementary school in Akalgarh near Patiala, said, “There are about 25 students in pre-primary in our schools. Many parents from nearby villages have also approached us to get their children admitted here. Earlier we used to run after parents to get their children enrolled in Class I in our school. Now they are taking the kids out of private schools and getting them admitted in government schools.”

Daljit Singh, principal of government primary school at Multania near Bathinda, said, “With the contribution of teachers and villagers, we painted one room especially for pre-primary class and Rs 5,000 was spent on it. Teachers got the paint and other items for children while the villagers painted the room for free. We have 11 children in this class.”

Punjab Education Secretary Krishan Kumar said these pre-primary classes “will help the government schools in a big way in the future and strengthen the foundation of the education system in these schools”.

The children of officers and all employees of Punjab Government will have to study in government schools as a draft proposal has been prepared in this regard by a ten-member committee of principals on the directions of the Punjab Chief Minister Captain Amarinder Singh. The final call in this regard has now to be taken by the state government.

Now we are on Telegram too. Follow us for updates
TAGS
Children’s Day Khed Mehal