Rising income of the ruling BJP has truly reflected in its spending in last few years.

NEW DELHI: Rising income of the ruling BJP has truly reflected in its spending in last few years. Unlike the Congress which has to cut into its expenditure due to successive decline in its income, the BJP spent a lot for different activities of the party in last few years.

Whether it is Press conferences or public meetings, rallies or advertisements, documents have revealed that the party has more than doubled its expenditure in last few years. However, all these efforts have only proved fruitful for the party as it has continuously spread its presence in most parts of the country by successfully winning polls after polls in many states.

A close look at the documents regarding assets and expenditure by the BJP has disclosed that the party did not hesitate to spend on those things which were needed for party’s expansion and its outreach activities in parts of the country. Like, expenditure regarding ‘morchas and rallies’ in the year 2015-16 was Rs 23 crore and it registered sharp rise of over 300 per cent going up to Rs 79 crore during next year 2016-17.

Similarly, expenditure on meetings also rose by more than 100 per cent as it went up to Rs 53 crore (2016-17) from Rs 25 crore (2015-16). The BJP also spent a lot in advertisement and publicity as it was trying to strengthen its reach in every nook and corner of the country including southern and north-eastern parts of the country. The spending under this head registered rise of Rs 100 crore, from Rs 164 crore in 2015-16 to Rs 264 crore in the next year.

Under its massive outreach programme, party held press conferences in states during
campaigning of the state polls. Spending on holding media conferences during the year 2015-16 was Rs 47 lakh and it went up to Rs 88 lakh in the next year.

BJP insiders said that party doesn’t hesitate to spend on those things which are needed for
winning polls.

“In last few years, the BJP has become largest party in the world having maximum number of members. Its presence has spread across the country. The party is winning elections after elections. When family becomes larger, it is quite natural that the expenditure will also increase,” said a party insider. 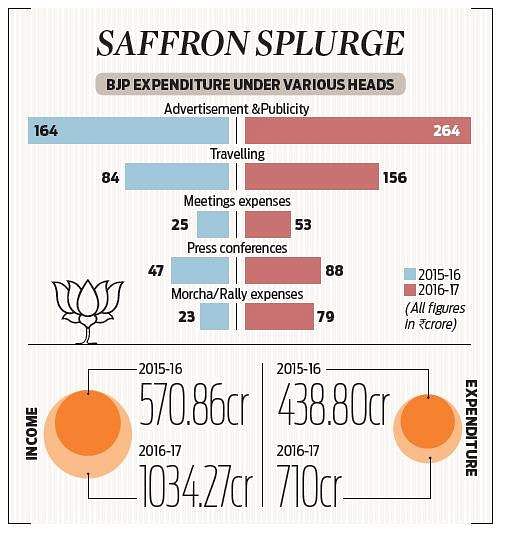